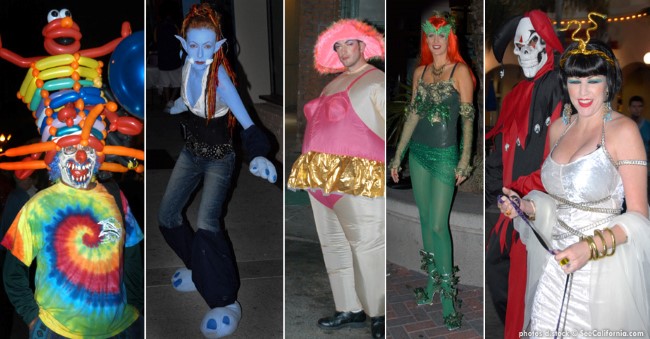 The costumes shown include a clever ” Poison Ivy”, 2nd from right in photo.

People are having fun planning their Halloween outfits this week and next. The biggest party anywhere will be West Hollywood’s free Carnaval on October 31, where the costumes can be sexy or outlandish, though fur in West Hollywood is faux pas this year after the city banned the sales of animal furs for clothing. Expect the fur to fly if you show up wearing real fur!

Seven in 10 Americans will celebrate Halloween this year and the average person will fork over $72.31 on costumes, candy and decorations. Just under $7 billion ($6.9) is expected to be spent in a single year, and the most ever spent on any Halloween in U.S. history.

Popular celebrity masks and costumes include Charlie Sheen mask for men, and top choices for women include Lady Gaga, Katy Perry and Snooki (or any member of the gang from the Jersey Shore cast). Michael Jackson’s death and the Dr. Conrad Murray trial have brought Jackson’s Zombie Dance front and center. The world Thriller zombie dance may switch the tables and push Zombie attire from #4 this year to #1 in popularity. Though the top 10 list was based on a sample of over 9,000 consumers in September, California’s unique demographic will likely skew the results toward more “zombie-ism”.

Americans are expected to spend $2.5 billion on Halloween costumes this year, $1 billion on children's costumes, $1.2 billion on adult costumes, and $310 million on pet costumes. Estimates come from National Retail Federation.