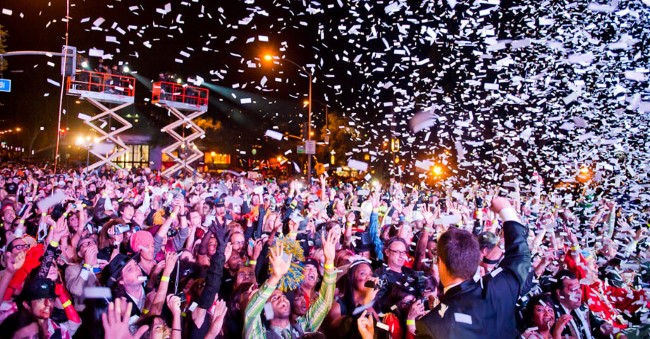 One of the world's largest Halloween celebrations, the West Hollywood Halloween Costume Carnaval along Santa Monica Boulevard from Doheny Drive to La Cienega Boulevard happens on Wednesday, October 31, 2018 from 6 p.m. to 10:30 p.m.

Each year, the City of West Hollywood hosts its Halloween Carnaval, one of the most unique Halloween gatherings in the world. Staged over a one-mile stretch of Santa Monica Boulevard/Historic Route 66, the Halloween Carnaval was launched in 1987 and is rooted in the foundation of the City of West Hollywood's diverse culture and community. The event has grown year-by-year into an annual gathering of phenomenal costumes, entertainment, culture, and self-expression.

*Although this event is open for all to enjoy, children and pets are not recommended.

Santa Monica Boulevard and Adjacent Streets to be temporarily closed for the City of West Hollywood Halloween Costume Carnaval, October 31

Due to the City of West Hollywood's annual Halloween Costume Carnaval, the following streets will be temporarily CLOSED as follows (based on previous year's information, check for updates at weho.org):

The City of West Hollywood typically suspends permit parking for the Halloween Carnaval from October 31 at 5 p.m. to November 1 at 12 p.m.

Carnaval-goers are asked to observe the boundaries of West Hollywood. If parking occurs in the City of Los Angeles, all parking restrictions must be observed.

Public Parking for the West Hollywood Halloween Costume Carnaval will be available at the following locations for a fee:

The Abbey is bringing not just one party, but four, with multiple artists and live sets over the course of Halloween weekend. You can purchase a wristband for the whole weekend or Oct. 31, but knowing The Abbey's ability to throw a good party, we'd recommend rearranging your weekend plans for this.

Party on with Brittney's Rage with additional appearances by Electric Hound, Danejer and Se7en4. The party goes until 2:00 AM, so pace yourself for a good time.

DIVE IN MOVIE AT MONDRIAN

Skybar at Mondrian
Mon, October 31, 2016 at 8:00PM
$40-$70
For a more mellow Halloween, dive in & chill at the Mondrian's poolside deck for a viewing of Jim Henson's Labryinth. Treat yourself to their Stella or Moet Reserve package for guaranteed seats and treats.

WEDNESDAY 13 WITH MICHAEL GRAVES, THE RHYTHM COFFIN AND MORE

Rock out to live sets from Wednesday 13 + Michael Graves, The Rhythm Coffin, Seven Days Lost and Undead Hearts. And who knows? Maybe a few rock star ghosts will be partying next to you.

The Viper Room
Mon, Oct 31, 2016 at 8:30PM
Free
Legit live music with no cover? We're in. This Monday night concert series at The Viper Room invites artists of all background to showcase their talents along Erik Himel's house band.

Pregame the Halloween festivities early on Wednesday at the local-approved watering hole, The Den. Karaoke will be bumping, and costume prizes will be awarded to those who bring their a-game. painting, costume contests, game booths,
prizes and more! The Carnival is free, open to
the public and great for families and children
alike. You won't want to miss this yearly
celebration of haunts!