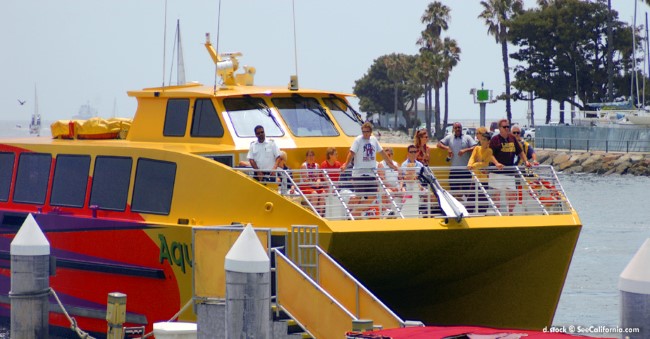 Da' boat! Da' boat is coming! Long Beach Aqualink is a great water taxi service that moves at a fast clip, getting you from one Long Beach harbor to the next in a ride that costs around $5. It appears each spring like the wind around late May, and disappears when the sun goes down on yet another summer around Labor Day weekend in early September. The long awaited boat service relaunches in 2011 on Saturday, May 28, according to a customer service rep at Long Beach Transit.

For $5 flat fee one way, you can leave three different docks but once you get off, there's no getting back on unless you pay again. The docks include Alamitos Landing near Seal Beach border, Queen Mary ship, and Aquarium of the Pacific. A smaller water taxi boat shuttles back and forth in the Rainbow Lagoon with six ports of call: Aquarium of the Pacific at Dock 4, The Queen Mary, Shoreline Village at Parker's Lighthouse, Catalina Landing, Pine Avenue Circle at Dock 7, and the Hotel Maya. Fare is only $1.

If you are ready to explore Long Beach by water, it's a ride worth checking out. You gain a whole new perspective on the attractions and landmarks from a water ferry service. The Aqualink roundtrip fee is $10, making it not the most affordable mode of transportation. In most instances you can park around the shoreline for less, and when you add more than one person to the Aqualink trip, the fees quickly add up-$40 for four people.

In 2011 the Aqualink introduces a new ride on July 1 — a direct route between Alamitos Bay Landing and Aquarium of the Pacific. It cuts 15 minutes off the traditional ride, taking only 30 minutes.

In addition to the water transportation services, a free bus ride takes tourists around downtown Long Beach and the shoreline. The Passport bus is a bright red bus you can't miss. While the service around downtown is free, to get from the Aquarium back to your car at Alamitos Bay Landing where you may have originally taken Aqualink to the Aquarium costs around $1.