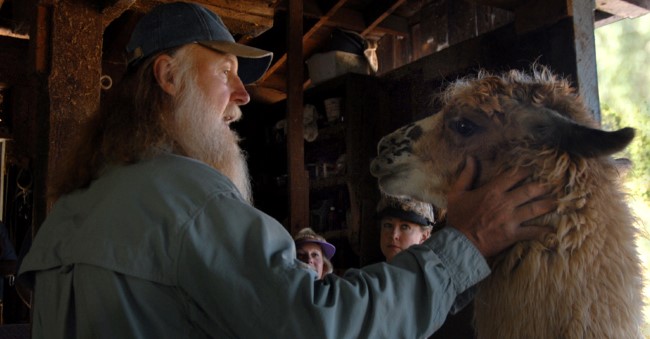 Pictured is a friend of the llamas, who has rescued well over a dozen such animals at his Tuolumne County farm. Some joke that the llamas identify with their “boss” because he kind of looks like them with his long beard!

Llamas are unique animals that serve man in so many ways. They bond with humans, have distinct personalities, and often must be trained to learn to socialize with other llamas introduced into a pen. Many a human heart has been broken when a llama passes away.

One sad, true story involves a llama tragedy. It’s about a Texas woman who owns llamas and dogs. The big-hearted lady with plenty of room on her farm took in several dogs who seemed to socialize well with her Great Dane pet. However, she didn’t know that the adopted strays and her Dane formed a pack. In fact, they got into the pen and slaughtered one of the llamas!

Convinced the two strays were completely guilty of the act, she found new homes for them, and kept her beloved, trusted Dane, cautiously watching it around the llamas. One day the pen was open, the Dane slipped away, and within minutes, the dog bit the nose off a one of the young llamas. Heartbroken, she discovered a lesson about llamas and dogs, and now is diligent in her care for both.

When llamas look at you with huge brown or black eyes, your heart melts. There are some people with hearts so big, they accept unwanted llama pets and take them in rather than allow these social animals to be slaughtered. The feed for llamas isn’t cheap, which often is a reason people want to get rid of these creatures after buying them. Do your homework and talk with llama owners before jumping in to get your own. It’s the best investment of time you’ll ever spend!

Llamas are used for:

There are a variety of farms and places to see llamas in California. But one of the most interesting places offers modest accommodation along the Northern California coast near Fort Bragg. “Lodging and Llamas” allows you to sleep in furnishings near the llamas so you can get to know them. The hotel provides llama treks in which the llamas can carry your picnic lunch and other sundry items on hikes to the surrounding, beautiful countryside and coastal beaches nearby ( lodgingandllamas.com).