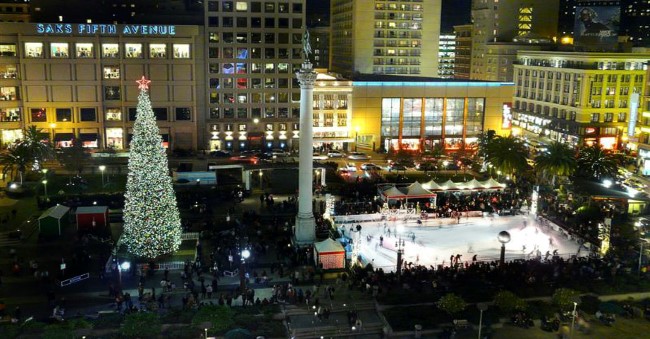 For those who like to shop, California doesn’t have 5th Avenue in beautiful New York, a pre-Christmas “must-visit” once in your life. You can hop on a flight and be there in less than a day, but you’ll certainly pay for the experience–to the tune of a few thousand bucks! And that’s before you shop.

There’s a place in California that rekindles the spirit of a “back East” winter shopping extravaganza, providing the next best thing to Times Square. We call it Union Square (unionsquareshop.com) and it’s in San Francisco. Sure, it’s missing the snow, the ice, and frost bite but it will do just fine for pre-holiday, “getting in the mood”.

With its own Union Square complete and a holiday ice rink overlooking Saks Fifth Avenue, you could blink and nearly think you’re in the Big Apple. But leave them’ apples behind and eat Chinese, Italian, Greek and all the great ethnic blends that our City by the Bay serves up. The Great Dicken’s Fair and many other holiday events are taking place right now.

You can get to San Francisco from nearly any place in California by hopping on a flight or driving, with costs as low as $39 each way on Jet Blue from Long Beach to San Francisco’s SFO. While Jet Blue does have deals to New York from California cities that are under $200 each way, with taxes and fees you’re still looking at $500 minimum travel, plus hotels in New York City that are notoroious for their high prices– starting around $150 for basic two diamond accommodations.

How much is a room in San Francisco this winter? Hilton Union Square is around $150/night and that’s 4 star quality! Hotel Mark Twain has rooms for $99/night, and many other options are in the $100-150 range, though you can certainly spend $500 at the St. Regis if you like.

While visiting San Francisco, you can access many of the great department stores found in New York, but there are couture and “only in San Francisco” shops such as Wilkes Bashford and Gump’s (gumps.com).

I’ve seldom visited San Francisco for less than $250 with a flight from Southern California and hotel room for the night. But for that price, you can get away for two days and a night and experience something that generations grew up with, the concept of going downtown and shopping at the big department stores. My mom used to take me downtown to shop on special occasions when I was a teen–growing up outside Kansas City, MO. It was an experience that was partially about shopping and mostly about soaking up the big city life. It’s a feeling that the world belongs to you and the possibilities are endless. Who doesn’t need that?