Pirates in California Celebrated in Events 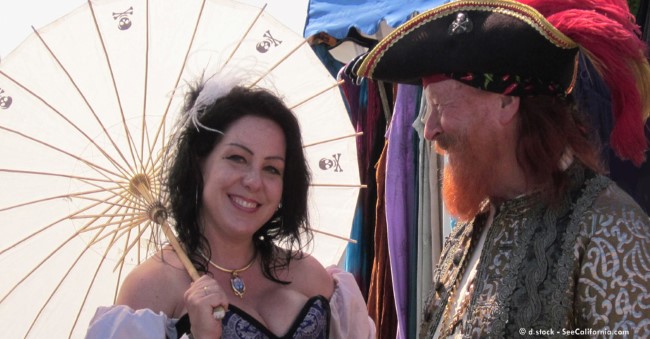 Californians are fascinated with pirate lore as much as any place, though there haven't actually been many attacks in recorded history along and near its shores. Each year in Sept. 19 you can "Talk Like a Pirate" in the international day devoted to pirate lingo and lifestyle.

Pirate events and attractions abound in California, including a permanent, year-round Pirates Dinner Adventure, and a seasonal Pirates of Emerson Pirate Ship Halloween attraction that is open from Sept. 30 - Oct. 31, 2011 (piratesofemerson.com)

We recently attended a Pirate Festival and discovered the costumes are a lot of fun. The event included ship battles in the ocean beneath the Belmont Shore Pier, sword fighting, vendors, and a costume contest, plus plenty of ale. Children seemed to love wearing hats and swinging their little plastic pirate swords through the air. We're putting together a list of pirate events in California, but are just getting started since we caught the pirate fever. Check back for updates if you are interested.

In California's past you'll find many more stories of outlaws riding horses, than pirates sailing ships. However, there was one famous pirate who attacked several California missions. Frenchman Hippolyte de Bouchard raided the Presidio of Monterey in 1818, nearly raided Mission Santa Barbara, and did some damage to Mission San Juan Capistrano in a period of just under one month.

While female pirates are few and far between, Anne Bonny lived and grew up in California before marrying a pirate and called herself one. Anne married James Bonny at the age of 16 and left California immediately. She met Jack Rackham or Calico Jack, and fled with him on his ship instead of staying with her "man". Women were normally forbidden from riding on pirate ships. They were considered too weak, as were most men. Pirates had to be the most physically fit. On the ship, Anne was masked as a man. She soon picked up the pirate traits and became an efficiently skilled pirate. The fact of Anne being a woman was soon known to the crew members but no one had any problem with her.

In 1720, Rackham's ship was under attack by the British Navy. All the crew members were drunk and it was upon Anne and another brave female also disguised as a pirate to save the day. They succeeded in resisting the enemy for a long time but were soon overpowered.

All the crew (including Anne Bonny) were arrested and taken to Jamaica. The men were declared guilty and were hanged. But Anne Bonny was pregnant and managed to escape death. It is believed the other female pirate died before sentencing.