Free beach parking, free admission to the event, free certificates for participation, and even free cookies and cocoa made it an affordable day for all. The turn-out was so huge that crowds entered the 57-degree water in waves, taking more than 45 minutes to complete the polar dip.

Tears of joy and sadness-As the Polar Bears welcomed the public to the 59th annual celebration and held a ceremony in which the Polar Bear King & Queen handed over their crowns to the next in line, club members expressed tears of joy for friendships established through the club.

Suddenly came important breaking news from the club president that John Olguin passed away just hours earlier on the morning of Jan. 1, 2011. The 89-year old co-founder of the club was energetic and chipper just months ago when we met him at a Sandcastle Festival at Cabrillo Beach. He had the vigor and enthusiasm of a kid, and most thought he'd live forever. 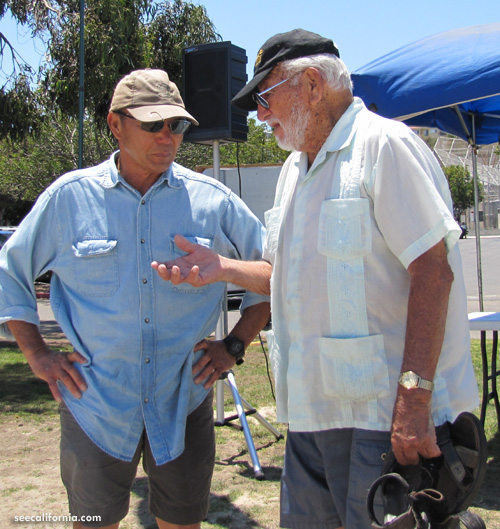 Better known in San Pedro than even Spanish explorer Juan Rodriguez Cabrillo who is immortalized with a large statue at the entrance to Cabrillo Beach, John Olguin was a living legend. He was a native of San Pedro who helped found the successful Cabrillo Marine Aquarium with its ever popular grunion greeter program. John was a funny guy who invented the grunion dance, among his many creative endeavors. Helping others until he became ill recently, he was awarded Citizen of the Millennium honors by the San Pedro Rotary Club.

Serving as director emeritus of the Cabrillo Marine Aquarium where John M. Olguin Auditorium bears his name, he established the Point Fermin Marine Life Refuge and San Pedro fireworks show on Independence Day - July 4. He served meals to the homeless, meals at Beacon House every Thanksgiving, and helped raise funds for the poor in an annul event, the CROP walk.

Club members said they had to pause and take a breath at the news of his passing, just as an event he created was about to begin. Many called him a mentor and hoped they'd some day swim beside him in heaven. "It's hard to imagine San Pedro without John Olguin," said Councilwoman Hahn.