Rubber Ducky to the Rescue in California Duck Derbies and Races 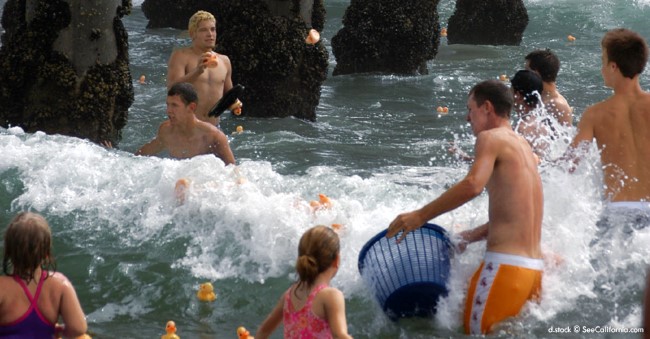 There must be something special about yellow rubber ducks. People go quackers for them. It’s said that a maid at the Royal Palace even spotted the Queen with one that wears a crown! In California, there are over 20 duck derbies and duck races held annually. If you’ve never seen one, the excitement centers around the race.

People purchase an artificial duck (or many) to help raise money for a special cause. Prices of rubber ducks are inflated beyond the actual cost to purchase and usually are priced anywhere from $5 to 100. When you buy a rubber duck, you become its sponsor in a race. Your name or an assigned number is written on the duck with marker pen to distinguish yours from the rest. Some participants opt to not take their ducks home (when it is an option) after the races have finished. Prizes in the races normally are obtained from donations and range from cash to electronics and trips.

There are companies that rent or sell, and deliver thousands of rubber ducks, and take them back after the event, cleaning them, recycling them, etc.

The rubber duck race or derby requires a source of water to race the hundreds or thousands of ducks that bobble and bounce toward some destination. To get them to move in a direction, there must be a slant on the artificial ramp, or waves you’ll find naturally in lakes and oceans. We’ve seen California duck races held in the Pacific Ocean with volunteers gathering the ducks as they come to shore, we’ve seen ducky races at water parks, and we’ve seen them in places where there’s no natural body of water. In those situations, the planners make their own water race course.

Rubber ducky fans can’t get their fill of duck-mania in California but can certainly get their fix.

Here are some rubber duck races and derbies in California to quack about: