What’s a Paleteria? A Place (or Person) that Sells La Super Paletas! 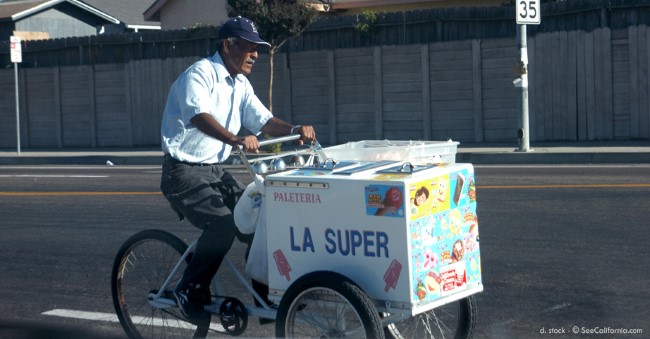 Pictured is “Paleteria – La Super” bicycle ice cream shop on wheels, driving along Donovan Road just off the I-101 in Santa Maria, CA.

The Hispanic population in California is one of the largest supporters of the old-fashioned ice cream truck concept–the big, musical circus on wheels that brings happy music and sweet, cold treats to your neighborhood. But they often prefer a Paleteria which sells items that are like Popsicles, but are called Paletas, apparently. These iced desserts on a stick are made of fruits and fruit juices, supposedly providing a healthier treat than Popsicles made of frozen sugar-water mixed with artificial flavors and food coloring.

The day I got my driver’s license when I was a teen, I began driving an ice cream truck and selling traditional Popsicles. My best selling ice treats were Bomb Pops and Frozen Malts, and I liked selling them because they brought in the most profit. During the summer when I was invited to parties, I parked my big truck and surprisingly, my friends came out of the party to buy ice cream. 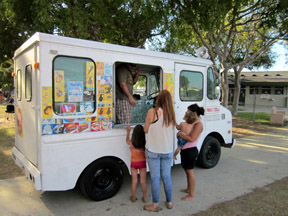 Recently I decided to buy ice cream from a truck (shown in photo) passing through a park where Hispanic families filled the spaces under shade trees, spending an afternoon. The ice cream truck driver who stopped said he needed a pit stop, but the lock on his van door didn’t work. So after chatting with him about how the ice cream business operates these days, he thanked me for watching his van, and gave me one of his best-sellers, an Ice Cream Sandwich made from chocolate chip cookies and vanilla ice cream.

I haven’t tried the Paleta yet, though many like it and say it is quite tasty . Sometimes I feel like I live in a foreign land in California because there are so many cultures with foods I have never seen or heard of.

I’ve done a little research before I taste my first Paleta, mainly because I made the mistake of trying Thai iced tea recently, not knowing it was made with real cream. It tasted great, but during my 2nd glass I started feeling queasy–it was too rich with all that sweet, thick milk.

So hear’s what I know about the Paleta (Mexican popsicle): Paletas are frozen fruit bars–the name “paleta” means blade or stick. Many paleterias (places that sell paletas) have Michoacana in their names, and it's believed that paletas were first sold in the state of Michoacßn in western Mexico or in Mexico City in the 1940s. In 1997, the franchise La Paletera was started in Corpus Christi, Texas.

Paletas can be milk-based (such as vanilla, chocolate, and coconut flavors) or water-based (such as mango, pineapple, and tamarind flavors). Paleta flavors can be divided in two categories: milk-based and water-based. Milk-based flavors are creamy in texture and traditionally include vanilla, chocolate, rum, coconut, pecan/walnut (nuez), and arroz con leche, which is a type of rice pudding. Water-based flavors include strawberry, mango, lime, cucumber, dill pickle, jamaica, cantaloupe, pineapple, guava, and tamarind. They are made from juices and sometimes include bits of frozen fruit. Although most flavors are sweetened with sugar, some are not, such as pepino con chile y limˇn (spicy cucumber with lime).

While paletas have been sold as a street food in Hispanic-American communities in the United States for many years, the last decade has seen a growth in U.S.-based brands and marketing. The California-based company Palapa Azul was created in 2002 specifically to reach a wider market of non-Hispanic consumers as well as the traditional customer base. One company, Helados Mexico, that began as a pushcart vendor in 1991, now sells its paletas in mainstream chains such as Wal-Mart.