If you were one of the first people to ride the new San Francisco cable cars back on August 2, 1873, your ride was free. By the end of the day the price of a fare was a nickel. Starting in July 2011, the fare jumps from $5 to $6 one way. And the type of car you'll ride is quite different from the first cable car that launched 138 years ago. The San Francisco cable car system is the world's last permanently operational manually operated cable car system whose cars are pulled along by cables embedded in the street.

San Francisco cable cars have come a long way, baby! Listed on the National Register of Historic Places, the favorite tourist experience and icon of San Francisco has been offline since January for much needed repairs of the transportation system, expected to re-open on Sunday, June 19, 2011.

While some tourists look to the skies hoping to fly one of the upcoming space shuttle programs that private enterprises are currently building, many continue to connect with the past in a ride that delivers old-fashioned sights and sounds such as the clang of bell. 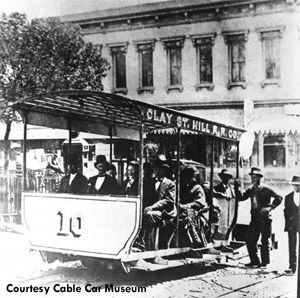 The cable car history contains many twists and turns in San Francisco. In jeopardy of disappearing numerous times, the system operates using a mechanism that grips cables that run beneath San Francisco's streets. The underground cables have been damaged more than once through earthquakes and general deterioration, shutting down the entire ride.

Powell-Hyde Line is a one-way route that runs north and steeply uphill from a terminal at Powell and Market Streets, before crossing the California Street line at the crest of the hill. Downhill from this crest it turns left and uphill again along Jackson Street to a crest at Hyde Street. Here it turns right and steeply downhill along Hyde Street to the Hyde and Beach terminal, which is adjacent to the waterfront at the San Francisco Maritime Museum.

Powell-Mason Line shares the tracks of the Powell-Hyde line as far as Mason Street, where it crosses Washington and Jackson Streets. There the line turns right and downhill along Mason Street, briefly half left along Columbus Avenue, and then down Taylor Street to a terminal at Taylor and Bay two blocks back from the waterfront at Fisherman's Wharf. There are man-powered turntables at each end to reverse the cars like the Powell-Hyde.

SFMTA "Muni" (sfmta.com) which operates the cable car system as part of public transportation celebrates 100 years in 2012. Muni operates approximately 80 routes throughout San Francisco with stops within 2 blocks of 90% of all residences in the city. Historic streetcars, modern light rail vehicles, diesel buses, alternative fuel vehicles, electric trolley coaches, and the world famous cable cars are among its fleet. For another treat, ride the historic streetcars! Here are several other fun rides in California.

Also be sure to check out Cable Car Museum (cablecarmuseum.org), 1201 Mason Street, San Francisco, CA 94108. They helped provide us information for this story. Admission is free!