San Francisco Palace of Fine Arts Not Quite 100, But Timeless 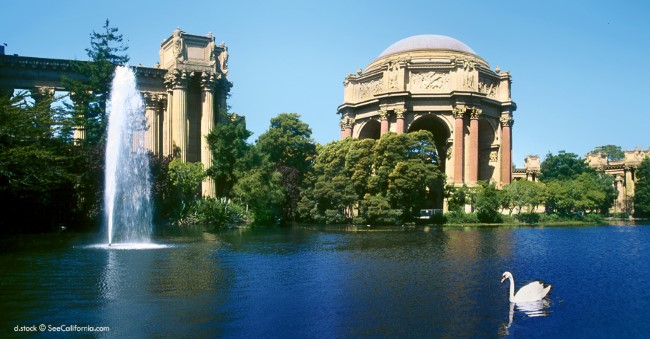 Palace of Fine Arts in San Francisco is a gracious Beaux Arts designed complex of walkways, collonades, and a centerpiece rotunda built in 1915 for an exposition. When this San Francisco landmark celebrates its 100th birthday in just over 3 years, it could easily seem like a tribute to to the millennia since the design was inspired by ancient Greek and Roman culture dating over 2,000 years ago.

With reflecting pools and fountains in front of the 1,100 foot pergola, an arch formed by rows of Corinthian columns framing a wide walkway around a central rotunda situated by the water, you may see graceful swans gliding aimlessly in the ponds. It is the perfect setting that invites plein air painters, film crews, and even weddings on location. Movies that have been filmed at the grounds of the Palace of Fine Arts include Vertigo, Jagged Edge, Twisted and The Bachelor, just a few of the dozens of productions.

Inspired by Roman and Greek architecture, the 635-acre complex featured 11 great exhibit palaces showcasing objects from every corner of the globe and more than 1,500 sculptures commissioned from artists all over the world when unveiled.

Today the Palace houses the Exploratorium– a public museum for kids & adults, and also contains a venue for concerts and theater entertainment. A full calendar of events includes everything from Classical to Hip Hop concerts. October 2011 events include Benise – The Spanish Guitar, The Hula Show, Turetsky Choir Anniversary Tour, 36th Annual American Indian Film Festival, 13th Annual San Francisco Hip Hop Dance Festival and 100th Anniversary of Xinhai Geming. Concerts and festival events are usually open to the public with tickets ranging from $10 for some shows to around $150 (palaceoffinearts.org).

There’s rarely a quiet moment at the Palace of Fine Arts. If you just want to see this San Francisco gem, a structure built shortly after the great earthquake of 1906 that destroyed much of the city, you’ll be glad to know that the building recently received a seismic retrofit during renovation, making it look as gracious and beautiful as the day it was built.

There are spacious lawns allowing visitors to sit with a picnic basket, take-out meal and even an old-fashioned book, enjoying all that activities and thousands of tourists that come & go daily. Such a visit is absolutely free!