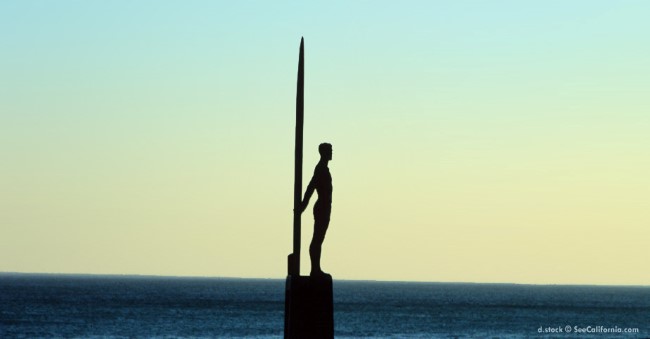 Pictured is a well known statue of a surfer overlooking the Pacific waters of Santa Cruz, where one famous man rocked the world with his neoprene wetsuit that would be embraced as standard attire for cold-water surfing around the globe. The statue might just as well be an image of and commemoration to Santa Cruz’s most famous surf legend, Jack O’Neill.

Jack O'Neill opened his first Surf shop in In 1952. The Santa Cruz resident starting his surfing empire from humble beginnings. Known for his can-do approach to solving surfing problems in attempts to make the sport of surfing better, O'Neill experimented with a newly discovered product, neoprene. The inventor pieced together neoprene materials to keep himself warm in the cold waters of Northern California.

The pragmatist says he just wanted to surf longer, which he could do by staying warm. Jack O'Neill launched the birth of the modern wetsuit and was on to something big! His O’Neill company grew exponentially, going international in the 1980’s and continuing to transform the surf realm worldwide.