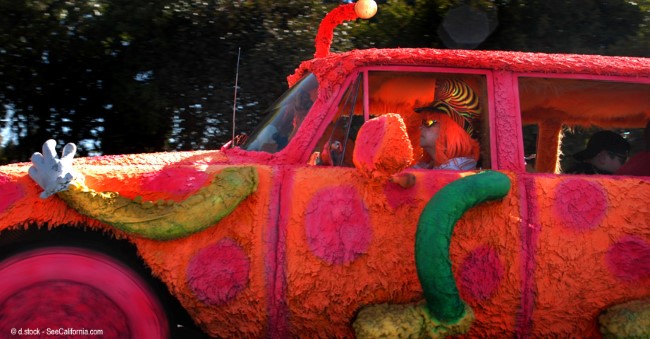 Pictured is a melon colored car called "Calliope the CANaloupe CANapillar", which is known as the world's hairiest limo! You may see it and owner, Gustine Castle, as part of an entourage driving between Northern and Southern California during ArtCar Fest (artcarfest.com) in late September, early October. You never know what you'll come across in Crazy California!

ArtCars are street-legal vehicles that artists have permanently modified into works of art. They bring creativity and individual expression into people's lives 365 days per year. ArtCar artists come from many backgrounds. Some are self– taught folk artists, while others have formal art school training or even custom car backgrounds.

California is known as the land of fruits & nuts-and that reference usually applies to people. Marketing studies in the California tourism industry yielded this conclusion: Tourists think of California as not only a diverse, must-see place to visit, but they also believe the people are kind of nutty and kooky. We like to consider ourselves as individualists, artists, thinkers and creators.

Some favorite, crazy things to see in California are best experienced when you're out and about exploring. One roadside attraction that always brings joy is Santa Claus, a statue in Oxnard. He used to be in Santa Claus Village in Carpinteria but with threat of being discarded, the kind citizens of Oxnard took Santa and gave him a home, new paint, and a happy smile to greet guests who can see him on the northbound lanes of I-101.

Other crazy things you might want to see span the state with many considered landmarks written about and photographed thousands of times.

Here are some beloved, crazy things to see in California!