Tuck Box English Tea Room in Carmel by the Sea 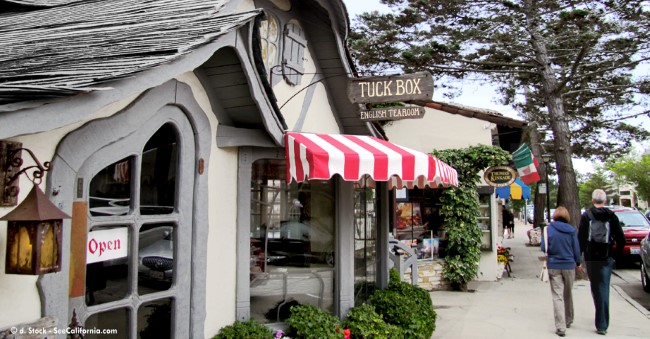 The quaint little cottage inspired by an Otsy-Totsy doll of the early 1900s looks too cute to for grown up people, but on the contrary, it fits the bill for great, English traditions such as a pot of tea and scones. Tuck Box English Tea Room (tuckbox.com) in Carmel was built in 1927 by Hugh Comstock and was based on his wife's doll collection. Opened in the early years as a restaurant called Sally's, it wasn't till the 1940's that the building on Dolores Street between Ocean and 7th Ave. in downtown Carmel took on the persona fitting its shape and character.

Two sisters from England fell in love with the charms of the cozy building and decided it would fulfill their dreams and carry the traditions they knew in England. Sweet ladies, Mrs. Bumbridge and Mrs. Watson, opened the tea house in the 1940s and ran the business for 8 years till they found the perfect British couple to carry on with what they had established.

John and Elsie Grandfield from England bought the business and Elsie made her mark with gourmet recipes that created the wow and memories people return to Carmel to experience today. While the Tuck Box has passed through many families and hands since its inception, many of the famous recipes Elsie created are still served at the restaurant and some are sold and shipped around the globe.