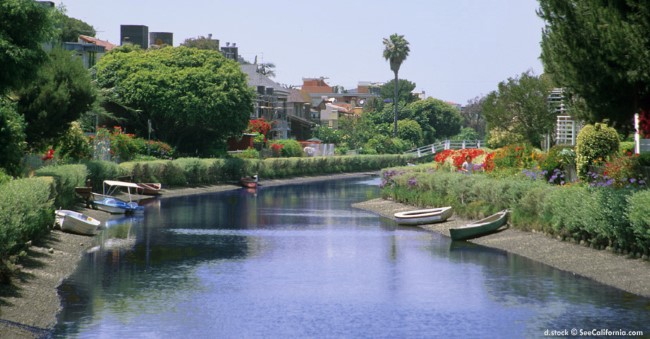 Which Venice gets more tourists-the famed Venice, Italy or Venice, California? If you guessed the latter, you are right! Venice, California, like other cities around the U.S. and world that have been built and inspired by Venice, Italy, actually hosts nearly double the tourists in a single year that the original Italian city sees during that time (less than 3 million in Italy and more than 5 million in California.) Though Venice Beach, California has its charms, Italians chuckle at the comparison that the two cities 6,130 miles apart have much in common beyond their names.

While Venice, California took its cues from the Italian art, architecture and music center considered one of the most important centers of the Renaissance movement, it bares no resemblance to the Italian "City of Water" stretching across 117 small islands in the Venetian Lagoon along the Adriatic Sea. In fact, most of the canals built in Venice, Calif. during the early 1900s were paved over when the City of Los Angeles swallowed up the unincorporated area and decided the canals were too costly and impractical for the L.A. budget and lifestyle. A few canals remain in Venice, Calif. and you can walk along small paved paths that run beside them to enjoy the quaint, scenic beauty. If you try really hard, you can almost imagine being in Venice, Italy....almost.

Venice, Italy has its icons -St Mark's Basilica, the Grand Canal, and the Piazza San Marco, and Shakespeare's Othello and The Merchant of Venice, that pay homage to the Renaissance city where music composers such as Vivaldi were inspired to create timeless classics we listen to today.

Venice, California has its icons-celebrities (nearly every major actor has lived in and around Venice at one time or another,) filming as a popular location set for hundreds of productions, pop recording artists, Venice Beach, Venice Pier, Abbott Kinney Boulevard known for First Fridays Strolls and the famed Muscle Beach with the workout pit, operated by the City of Los Angeles Recreation & Parks.

If there's one icon that draws people to Venice, Muscle Beach would probably win first place. Each year around 4th of July and Labor Day Weekend a body competition is held with top builders from around the globe coming to Venice to show of their pecs and win honors as the best.

There's a saying that when in Rome, do as the Romans do. With a variation on that theme, when in Venice (California) you can do as the locals and actually work out in the pit. Most Venice tourists simply take photos of the amazing muscular people working out, but if you are adventuresome and know your way around a set of weights, go ahead and try it!

Where to stay: Venice has several decent hotels walking distance to the beach by just a few short blocks. One of the most popular and affordable is the Inn at Venice Beach along Washington Ave. near Venice Pier. Venice Beach Suites is a little cheaper, but it's also only a two diamond (out of five) property.