Dust Off Your Dirndl, Brush Off Your Lederhosen - Celebrate Oktoberfest California Style! 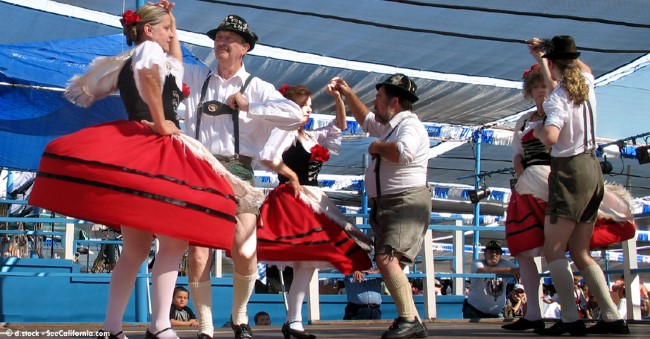 The annual tradition that comes each fall season in California invites you to put on a funny costume, eat, drink, party and dance. No, we don't mean Halloween, the OTHER annual fall tradition. We're talking about Oktoberfest, filled with Chicken Dances, import beers, low-cut tops with ample cleavage and twirling skirts for women, little leather shorts, suspenders and knee socks for men, sausages, sauerkraut, strudels and tubas.

Oktoberfest got its start in Munich, Germany in October 1810 as the celebration of a wedding. It was such a hit that it launched an annual event now 201 years old. Oktoberfest usually occurs 16 days before the first Sunday in October in Theresienwiese, Germany, and is called die Wiesn or the meadow in Bavarian dialect. A special Oktoberfest beer is brewed for the occasion which is slightly darker and stronger in taste and alcoholic content. It is served in a one-liter-tankard called Maß. Only local Munich breweries are allowed to serve this beer in Bierzelte (beer tents) that are massive, holding 3,000 to 10,000 people.

Americans host their own versions of Oktoberfest, and California has over 100 Oktoberfest events ranging from one day fundraiser celebrations and beer tastings to full blown parties that span well over a month of activities in German venues around the state such as the Phoenix Club in Anaheim, Alpine Village in Torrance, and Old World Village in Huntington Beach, where concentrations of German immigrants have carried the cultural traditions of the homeland for decades.

We're compiling the Oktoberfest celebration list and there's more to come, but here's a start that will help you find an event in your part of California.