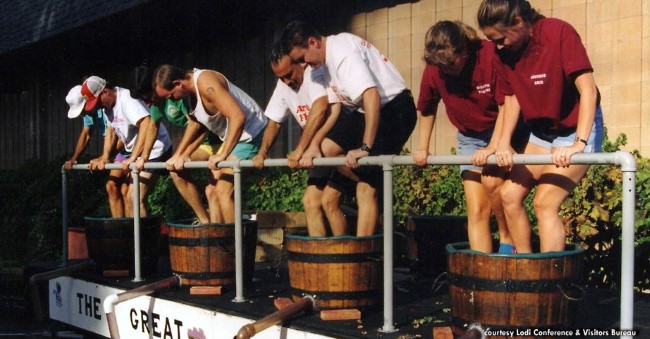 The Festival promotes the agriculture and agricultural products of San Joaquin County in a  unique, family oriented event that includes  Lions Clubs, 4-H Clubs, Boy Scouts,  Future Farmers of America, Farm Bureau and Grange Associations. Organizations raise money by selling products at the Festival or by entering competitive exhibits offered each year. Well over $150,000 is raised annually by non-profit groups as a result of the Festival, in addition to the more than $30,000 in prize money paid out by the Festival each year to individuals and groups. Over 77,000 people attend the event annually during the four day run, making it one of the biggest, most successful events of the year.

Live entertainment, carnival rides, contests, and the annual grape stomp are a few of the activities to look forward to at this fun festival that's quite affordable (under $10 admission last time we went!)

It began during the Great Depression in 1934, and has grown to become a popular tourist attraction drawing guests from around the globe. The first Lodi Grape Festival opened on Sept. 7,1934. The three-day event was based at the Southern Pacific Railroad Park along Sacramento Street by the Lodi Arch. There were  festival activities scattered throughout the city— downtown park along Sacramento Street included the festival featured grape exhibits and amusement rides such as the giant Ferris wheel and merry-go-round. Set up in other areas of the city were a swimming and diving event at the Lodi Baths (at today's Hale Park), Japanese wrestling and donkey baseball at Lawrence Park, a golf tournament at the Woodbridge Golf and Country Club, a dog act at Pine and School streets, dancing at Eagles Hall, boat races and fireworks at Lodi Lake and stunt flying at nearby Lind's Airport.

Grape murals, a trademark of the Lodi Grape Festival, first made their appearance in 1950. In the beginning, grape bunches were used to depict artistic scenes on flat boards. Later, the technique was refined, and individual grapes were glued down to create the colorful designs. Clubs, school groups and individuals compete for cash prizes in this event.

In 1976, the festival expanded to four days. A Kiddie Parade, held in downtown Lodi on the Saturday morning of the festival, remains a popular festival event. There have been many changes over the decades, but the Lodi Grape Festival remains a September tradition of honoring the community and the grape harvest.