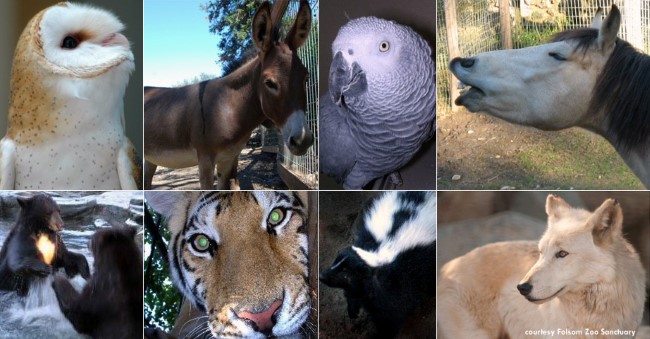 Closed most Mondays, fee around $3-7* subject to change.

This is not a "mainstream" zoo! It is NOT a member of the American Zoo and Aquarium accreditation program because the AZA code of ethics is not in keeping with Folsom's--they don't breed, sell or trade animals.  The zoo says it isn't hammered by animal rights groups because it is the bottom line in caring for animals that were rejected elsewhere and probably wouldn't survive without care.

Folsom Zoo includes injured animals that are lovingly cared for while providing a learning environment for the public to see up close nature's wild and beautiful creatures. All have names and personalities, and their individual stories are posted at the exhibits, along with factual, up-to-date information about their species.

The residents of the city-operated facility are all non-releasable. Some were pets that were rejected, others were injured or orphaned in the wild. Most are native to North America.  Zoo programs stress that wild animals don't make good pets.  Rather, it is a sanctuary in management and philosophy, except that it is open to the public, for a fee, six days a week.