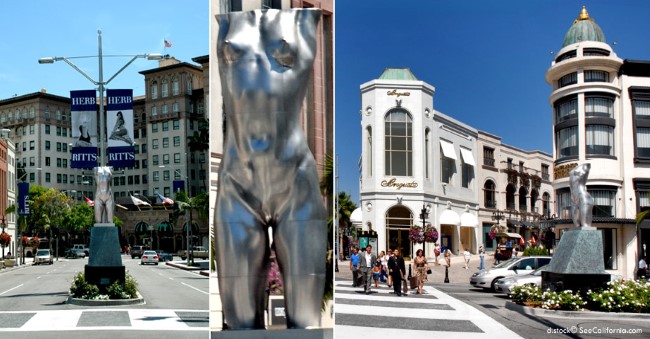 Dedicated on June 11, 2003, the Torso is the centerpiece for the Rodeo Drive Walk of Style.


You can't miss the silver "Torso" by Robert Graham, a 14 foot carved aluminum sculpture in Beverly Hills. Installed at the corner of Rodeo Drive and Dayton Way in June 2003 to mark Rodeo Drive as the destination for Walk of Style, the event honors designers for their contributions to the worlds of fashion and entertainment. The work which was commissioned by the Rodeo Drive Committee and given to the City of Beverly Hills, is emblematic of Graham's lifelong fascination with the female form.

Other works by Graham in California include the Great Bronze Doors for the Cathedral of Our Lady of the Angels, Los Angeles (2002), Los Angeles Olympic Gateway (1984) and Source Figure (1992), a bronze sculpture on top of Bunker Hill Steps leading down to the Los Angeles Public Library.

Robert Graham passed away in 2008 in Venice, Calif. at the age of 7o. He was born in Mexico City in 1938 and earned his BA from San Jose State College and his MFA from the San Francisco Art Institute. More than 80 exhibitions in the United States, Europe, Japan, and Mexico and artwork in many national and international museum collections are a few of his accomplishments during his life. Robert Graham passed away Dec. 27, 2008, the same month he was inducted into The California Museum's California Hall of Fame.

Beverly Hills Events include Music in the Mansion, Shakespeare in the Park and the elegant Greystone Mansion Councours d'Elegance.

A couple highlights in addition to shopping and gourmet dining include the Beverly Hills Trolley allows visitors to see Lives of Rich and Famous on the Cheap in an affordable narrated ride around the city telling you the background stories of the celebrities, and the Beverly Hills City Hall. It is uniquely adorned with colorful paint, and its architecture is a stand-out.
Where to eat: