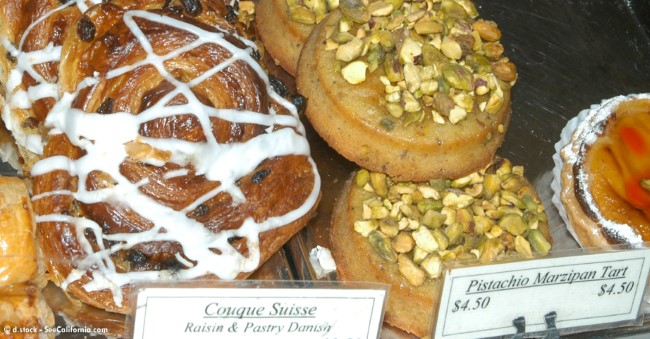 Le Pain Quotidien,  French for "the daily bread," is a privately held company with restaurant locations in cities around the globe where there's a love of fine breads and pastries and clientele willing to pay a bit more for the guarantee that it is made fresh today, by hand.  The company aims for organic ingredients whenever possible, and seeks out the best sources, claiming to even grow their own items if they can't find the proper sources.

Bakery breads are made fresh daily and they look simply amazing. There's something uniquely special about a crafted loaf of bread versus the standard machine made product. Using organic stone-ground flour, salt, and water, kneaded and shaped by hand and baked in a hearth by artisan bakers, of course you're going to pay more. But once you purchase a perfect, fresh loaf of bread, it can spoil you, and that's the success behind Le Pain Quotidien's products and marketing.

Have you ever heard anyone describe "the magic of buttery"? The company does when it boasts its pastries in the ptisserie are made to perfection.

Belgium chef Alain Coumont is the founder of Le Pain Quotidien. After  stints as chef in New York and Europe, he opened a restaurant in Brussels where he served fresh bread and simply meals. His passion for quality bread products provided the impetus for him to launch his business. Since sources were hard to come by, he decided to make it his goals and task to become the source for quality.

Cook+Book, document his story and the sequence of events leading to Le Pain Quotidien (PQ).  Cooking for his parents' friends' dinner parties while still at school – he became apprenticeships to France's top chefs, went to New York, then returned to Belgium. The name of his new restaurant which means daily bread stems from a comment his father once made, ‘ce n'est pas mon pain quotidien.'

Another unique aspect to his business (in addition to its name) is a long table to be placed in the restaurants. "If I hadn't bought that big table, I wouldn't be here today because I am sure that this is what has distinguished us from all the competition," he said.  Launched in 1990, PQ has grown to close to 150 restaurant bakeries. Few have folded and many are on the way, including hopes of expanding in 2011 into the Japanese market.

Location, location!  Coumont seeks out locations  on a corner, close to a few clothes stores or a florist or where there are a few trees in any crowded city. One reason people enjoy PQ, he believes, is that it combines seemingly inexpensive farm food – bread, butter, eggs, jam and cold meats – all set right in the heart of a metropolis. One such unique location is on Melrose Avenue in West Hollywood, and yet another in Central Park, New York.

Le Pain Quotidien's boulangerie fare--soup, salads, tartines, breakfast, homemade pastries, vegan dishes,  and handmade organic bread--are meant to provide a flavor of Belgium countryside lifestyle with communal tables, artisanal dishes and tranquil environment. Such marketing is lost on some who in their reviews of the restaurant, can't accept that there are no traditional American style breakfasts on the menu served. And the price is not for Costco shoppers who buy their baked goods from such discount houses. PQ appears to take caution to avoid opening shop in locations and markets that lack an affluent audience.

Alain Coumont has grown his empire and surrounded himself with experts who help run the operation in New York and Belgium. Dabbling in the wine trade, as well, he co-founded BioGhetto.com, to produce and market organic vins de pique-nique (picnic wines) from the Languedoc Roussillon region of France. Trusted partners include a Lodi, Calif. vintner.

In 1997, Alain opened his first store on Madison Avenue in New York City, which was an instant success. Shortly thereafter, he met a group of Belgian investors who backed his U.S. expansion plans. With this financial support, he opened several locations in New York City and later in Los Angeles. In 2004, headquarters were established in New York City. Today Le Pain Quotidien has a global network of over 140 stores in 17 countries.

Le Pain Quotidien offers a variety of pantry items that are used in the bakery-cafés which are available for purchase to enjoy at home, including jams, chocolate spreads, olive oil, sun-dried tomatoes and even the organic coffee. These items are also used in the kitchen as ingredients and shared on the communal table.

Le Pain Quotidien  became a Certified Green Restaurant™  in 2006 with  green initiatives  that include store recycling programs, using recycled and chlorine-free paper products, installing water- and energy-efficient low flow spray valves and offering biodegradable disposables for takeout items. The company also uses reclaimed wood to make the furniture in its restaurants and recycled gypsum board and environmentally friendly paint in all new construction.

In March 2010 it was announced by ITOCHU Corporation that Le Pain Quotidien signed an agreement to launch bakery-restaurants in Japan, along with an exclusive import and sales agreement, and an exclusive production and sales agreement, for Le Pain Quotidien products in Japan.
ITOCHU and Hokkoku plan to leverage their partnership to operate the bakery restaurant business in the Japanese market under the same concept as all other Le Pain Quotidien restaurants around the world. The two companies plan to develop the operations through strategic marketing activities and opening freestanding restaurant as well as restaurant in commercial facilities and department stores. The companies aim to expand this business to 4 billion yen on a retail price basis with 20 restaurants after six years.

While this development is a departure from Coumont's previous efforts to buy back sub-franchises, reportedly because of quality control concerns, in the world of business, you must continue to grow or be "eaten up."

California locations --be sure to call before going to confirm the location.