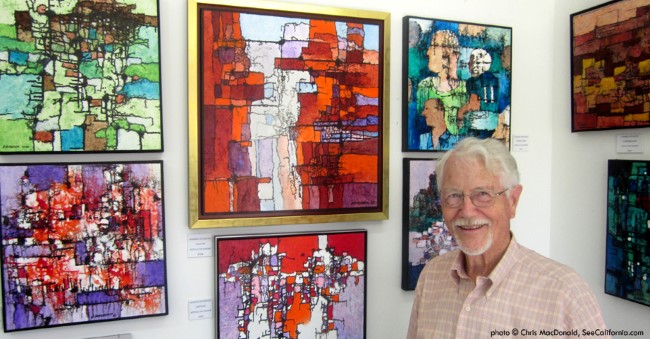 Huntington Beach, California --Howard Hitchcock is a Huntington Beach-based artist who taught in the Art Department at California State University, Long Beach for 32 years, all during his career as an artist as well as teacher. A master in both metals and canvas, Hitchcock's works often are satirical in nature, funny or present commentaries on life.

Focusing primarily on sculptural art, he initially used wood and clay, and discovered in 1964 the ceramic shell mold process for industrial casting. In his book, "Out of the Fiery Furnace: Casting Sculpture in Ceramic Shell Molds", (William Kaufmann, Inc., 1985) Hitchcock documented the process that became his own as he explored its use in the creative process.

Hitchcock used to bronze cast all of his own sculpture on campus where he taught several decades, and he enjoyed seeing students develop their very own styles while he continued to create art, himself.

His stainless steel sculpture "Giving fir Life" was installed in 1987 in front of the American Cancer Society office in Long Beach. Howard has exhibited throughout the U.S., Mexico and Japan. He is included in Who's Who in American Art and was selected as Huntington Beach "Artist of the Year" in 1989. His bronzes address visually, often with wit and ambiguity, the human condition--relationships and stresses that most of us experience at some time in our lives.

Howard Hitchcock was born in 1927 in Ava, Missouri. He resides in Huntington Beach, where he creates many paintings and sculptures today. So prolific is this master, Anderson Gallery generally holds one or two new exhibits of his work annually.