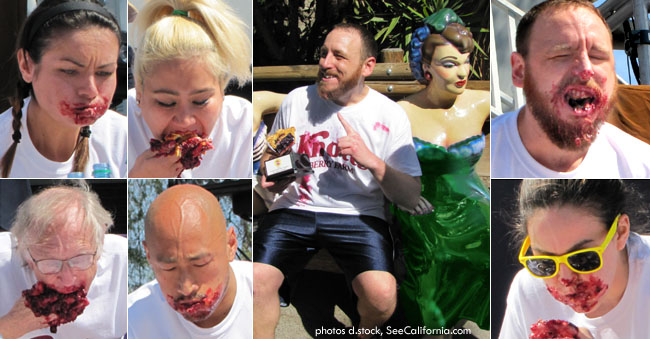 Top competitive eaters squared off against each other in the World's Boysenberry Pie-Eating Championship during the launch of the 16-day Boysenberry Festival at Knott's Berry Farm, March 19, 2016. These major munchers included Miki Sudo, known for once consuming 104 hard-boiled eggs in 8 minutes, Michele Lesco, who has eaten 152 chicken wings in 10 minutes, and the amazing Joey "Jaws" Chestnut, who owns 31 major league eating records, including last year's World Championship, where he ate 14 pounds of Knott's Boysenberry Pie in 8 minutes. Would he be able to successfully defend his World Record? 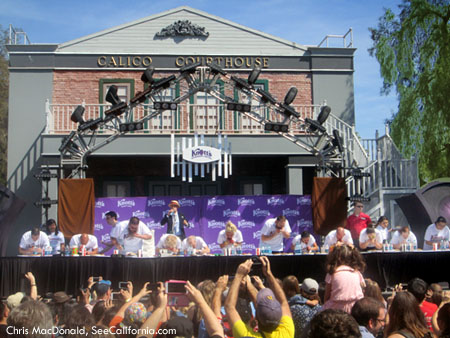 Event Emcee Diamond Dave told the crowd of thousands gathered around the Calico Stage by the Knott's Train, Stagecoach and Ghost Town, that "major league eating competitions are the fastest growing sports in the world. There are over 75 such contests and growing."

Chestnut previously gained international fame for winning 8 Nathans' hot dog-eating championships in New York. Could he put the "dog" out of his mind long enough to win his second World Boysenberry Pie-Eating Contest? Only time would tell.

The gigantic crowd packed into Calico Square and counted down the last 10 seconds before the contest began as competitors psyched themselves up, stared at the pie before them and focused on their first bite. Like a horse race, off they went in a blur of pie face jamming that would have stunned a 1-year-old. Steve Hendry was out to a quick start but unbelievable Joey had already gulped down 4 pounds of pie in the first 90 seconds!

For some of the leaders, there seemed no time to chew, they had to engulf, sucking up the delicious pie like a vacuum cleaner. No time to glance at the person alongside you as efficient Knott's personnel kept adding more fresh plates of pie with a cadence that kept up with the competitor's rhythm. It looked like a War Zone with boysenberry stains all over the athlete's faces, hands, arms shirts and even up their noses.

Each had their own styles; some seldom even took a drink of water to wash it down. Joey of San Jose was clearly the one to catch. His motions were like a controlled robot going full speed ahead, gaining confidence with every pound of pie that entered his system. He polished off 6 plates of pie in just 2 minutes and hadn't even showed his best stuff yet.

"You're truly watching greatness here," an almost hoarse Diamond Dave shouted to the excited, cheering crowd. "This is something you will always remember. You'll know just where you were when you watched this!"

The feverish pace of the competition certainly showed the audience a new meaning of the word "munching." Some swallowed the pie whole, others washed it down, a few jammed it down their throats, several even managed to chew.

It seemed some leaders hardly took a breath as they consumed competitively. It was something you really had to see to appreciate. And like a flash, the 8 minutes were up; the war was over as food athletes congratulated each other, washed up and changed to clean shirts as thousands cheered, awaiting the results.

The late Walter and Cordelia Knott would have loved this event and Knott's Boysenberry Festival. Every boysenberry in the world can be traced back to Walter and his berry farm. The boysenberry was created by Rudolph Boysen but abandoned. Walter brought the old bushes to his farm and by 1934 he was growing a bumper crop of enormous, sweet-tart berries. Along with Cordelia's berry preserves and pies, folks came from across the country to sample the wonderful boysenberry (a cross between a red raspberry, blackberry and loganberry). Millions still come to Knotts to taste the berries, chicken and wonderful food.

Find out more about the Boysenberry Festival at Knotts.com/boysenberry.