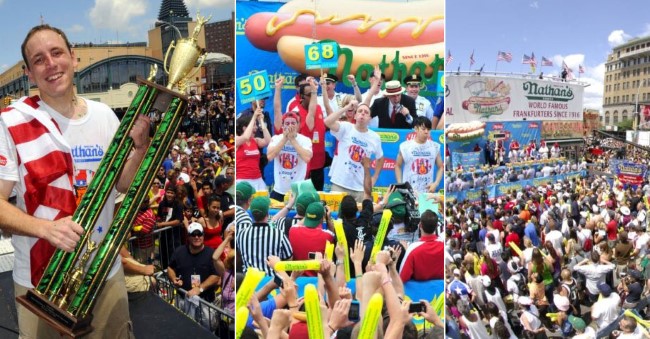 Millions of hot dogs will be cooked, sizzled and served this 4th of July. Most people will be polite and eat no more than two or three. But the most famous California hot dog eater from San Jose, Joey Chestnut, can scarf down 68 dogs in 10 minutes. He's the champ who already holds the world record for eating the most Nathan's Famous Hot Dogs and Buns (nathansfamous.com), and he will seek his seventh straight title in 2013 – a world record. He has to eat at least 69 hot dogs this time around to best his own record!

Nathan's Hot Dog Eating Contest has occurred each 4th of July in Coney Island, NY since 1916, the year Nathan Handwerker opened the legendary restaurant. Major League Eating, the governing body, sanctions the Nathan's Famous Hot Dog contests and ensures safety standards are in place at each event. Here are some California hot dog eateries recommended by a Sacramento contributor. If you're into food, Californians set the record for the World's Biggest Hamburger, and also World's Biggest Lollipop, both in the Bay Area not far from Joey Chestnut's home.