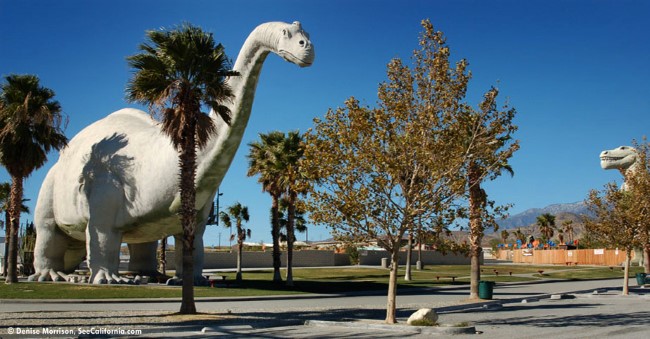 Cabazon, California has at least two claims to fame. One was its disbanding itself from cityhood in 1972 after years of city hall scandals. The other is the dinosaurs hanging out in town.  Just off the 10 Freeway in Cabazon visitors like to stop and see two dinosaurs, models built by a now deceased architect Claude Bell, whose sculptural work has been enjoyed for decades at Knott's Berry Farm.

Though Bell reportedly wanted the dinosaur's eyes to light up and spit fire  to scare, those items were never added. When Bell died in 1988 the 45 foot high X 150 foot long "Dinny", his original beast, and mate, "Mr. Rex", were purchased along with the land  Bell owned and operated as a restaurant by Cabazon Family Partnership and MKA Cabazon Partnership of Costa Mesa.

Dinny, a 150-ton building in the shape of a larger-than-life-sized Apatosaurus which took 11 years to construct between 1964 and1975, and a 100-ton Tyrannosaurus rex structure  completed in 1981 were originally built to attract customers to Bell's Wheel Inn Cafe. The investors expanded the Cabazon dinosaur site to include restaurants, a museum, gift shop, and a 60-room motel (exit Main Street).  The dinosaurs are free to see, and worth a picture stop on your desert trip between Los Angeles (90 miles west) and Palm Spring 15 miles east of Cabazon).