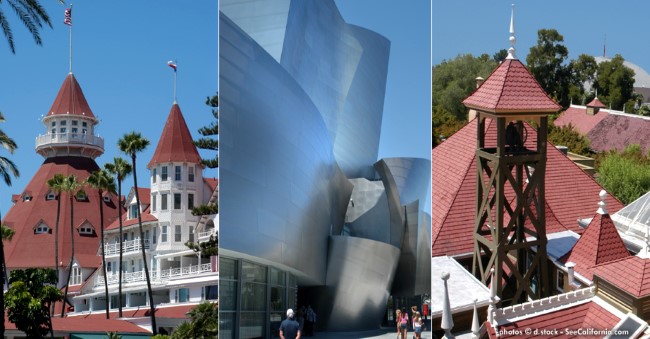 California's three biggest cities by population--Los Angeles, San Diego and San Jose, offer a world of things to see and do. But for architectural, must-see attractions, there are three building we'd like to point out. All are open the public for tours, each takes about 1-2 hours to see during a tour, and all are worth going out of your way when visiting California's top cities.

Facts:
Built as a resort in 1888
11 U.S. Presidents been there
Haunted? Yes, the ghost of hotel guest, Kate Morgan, never checked out.
Designed by Story & Babcock
Largest resort hotel in the world and the first to use electrical lighting in 1888
Late Victorian, Queen Anne style

Volunteers from the Coronado Historical Association lead a walking tour of one of America's most beautiful beach resorts. With its iconic red turrets piercing the taut horizontal lines of an azure California skyline, the Hotel del Coronado radiates with a confidence of gracious Victorian splendor that is without equal.

Hotel del Coronado Tour
Volunteer docents from the Coronado Historical Association lead a 75 minute tour throughout the historic Hotel del Coronado. Tours depart on Tues and Fri at 10:30 am, and on Sat and Sun at 2 pm. $15, children under twelve are free. Reservations required. (619) 437-8788

Coronado Heritage Walk
This promenade through the past departs from the lobby of the Museum of History and Art, 1100 Orange Avenue, on Wednesdays at 10:30 am. Learn about Coronado's famous buildings and residents. Fee includes Promenade through the Past: A Walking Tour Guidebook of Coronado and admission to the museum. $10 per person, reservations required. (619) 437-8788 coronadohistory.org

Tour Schedule from the Music Center

Tours of Walt Disney Concert Hall do not include the auditorium due to a near constant rehearsal, performance and special event schedule. The Hall's vineyard design creates outstanding acoustics and there is not a discreet way to enter the Hall without disrupting these activities.
Tours at the Music Center

Victorian craftsmanship in an extravagant maze is marvelous, baffling, and eerily eccentric, to say the least. Tour guides must warn people not to stray from the group or they could be lost for hours! Countless questions come to mind as you wander through the mansion – such as, what was Mrs. Winchester thinking when she had a staircase built that descends seven steps and then rises eleven?  Miles of twisting hallways are made even more intriguing by secret passageways in the walls
There are roughly 160 rooms, including 40 bedrooms, 2 ballrooms (one completed and one unfinished) as well as 47 fireplaces, 10,000 window panes, 17 chimneys (with evidence of two others), two basements and three elevators. Winchester's property was about 162 acres (650,000 m˛) at one time, but the estate is now just 4.5 acres