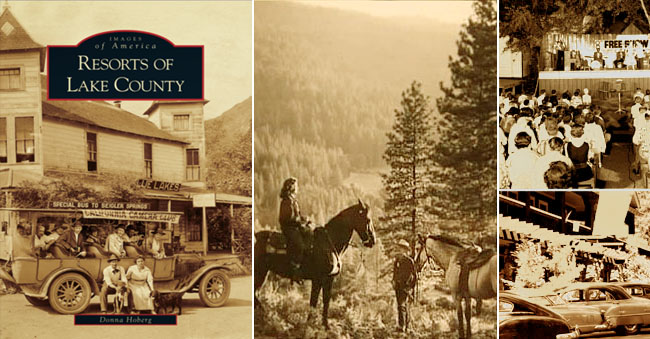 Northern California's Lake County has been known over 150 years for its spectacular hot springs, lakes and mountain scenery, which attracted thousands to the region.

Resorts of renown, such as Hobergs, Siegler Springs, Whispering Pines and Bartlett Springs, were created to the delight of tourists looking to escape urban life. Some came to relax and rejuvenate; others for "medicinal cleansing" and most "to have the time of their lives."

Donna Hoberg, part of the Hoberg Resort family, has written a fantastic book, complete with priceless historical photos, documenting the incredible recreational/relaxing facilities which dotted the Lake County landscape since the 1860s.

Civil War veteran Gustav Hoberg came with his wife Mathilde to the Cobb Mountain area in 1885. They started accommodating Summer guests on their spectacular 300 acre property, which was co-owned by Gustav's brother-in-law, George Kammerer of San Francisco. When Hoberg died suddenly, Mathilde and son, Max, built cabins, recreational facilities and eventually a hotel.

Generation after generation of the hospitable Hoberg family enhanced what became Northern California's largest privately-owned resort, complete with a large Dining Hall, Bowling Alley, Tennis Court, Swimming Pool, Horseback Riding, Arcade games and a Main Lodge for the more than 1,000 guests. Most loved it so much they came year after year after year.

It was a family-oriented place, with childcare, as well as a popular retreat for Hollywood Stars (like Clark Gable), Boxing Champ Max Baer, Mayors, Governors and entertainers (such as Freddy Martin, Xavier Cugat, Merv Griffin, who performed in the Pine Bowl).

Hobergs was known for the special hospitality of its longtime employees, like the waitresses and entertainment czar Ozzie Coulthart, who blew his trumpet to attract crowds and participants to his baseball games and swimming contests.

The resort prospered through the 1960s, then tourists started taking planes and ships to other destinations. In 1971, Hoberg's closed down but the State of California leased it for two years as a boarding school for the disabled. In 1974, it was sold to the Maharishi International University. However, in 2014, new owners wanted to return it to the Glory Years with lodging and musical concerts. Unfortunately, in 2015 the entire facility burned to the ground in the Valley Fire, one of the worst disasters in California history.

Author Donna Hoberg used her own family photos, along with ones from the Lake County Historical Society, Lake County Museum and guest pictures, to take readers back in time to relive yesteryear.

She features many of the county's resorts in the Northeast Hills, Blue Lakes, Lakeport, Kelseyville, Middletown and much more.
Siegler Springs had a naturally heated spring water indoor pool "as warm as a pleasant bath." There were Roman baths and a full-time masseuse.

Nearby Howard Springs advertised it had permanent cures for 17 different diseases of the stomach, liver, kidneys and blood. In 1877, C.W. Howard developed the property, which had 42 hot and cold springs, with temperatures ranging from 50 to 110! Water from the springs (Lithia, Bohemia & Eureka) was bottled and sold for table use.

Bartlett Springs, northeast of Clear Lake, dates from 1872. It's famous water was hauled by wagons to San Francisco and Sacramento for shipments all over the World. The spring water was the only soda water used on the Cunard and White Star Cruise Ships!

Forest Lake Resort was created in the 1930s as Camp Calso by Jim McCauley. Guests loved playing a Bingo-like game, Calso, named after the bottled water. They also danced the night away to Jimmy Catalano and his Band. Forest Lake was later sold to Calistoga Mineral Water (part of Nestles Corporation).

Some of these tourist destinations have survived to this day. In the 1930s, the Strickler family started Whispering Pines Resort, in the heart of Cobb Mountain. A very popular, family-owned business for 5 generations, it has cabins, a tennis court, swimming pool, basketball court and more.

Readers will love to read this book and learn about an earlier era and these fabulous places, which brought memorable joy to thousands of people from around the World. You can still have a blast in beautiful Lake County Resorts today. Check them out!

(The reviewer's parents started going to Hobergs in the 1940s and he was fortunate they took him there and to Forest Lake in the 1950s & 60s. His father was even pictured on a resort promotional postcard playing tennis. What fond memories he vividly recalls with joy to this day. He still listens for Ozzie's trumpet blast which welcomed everyone to come join the fun at Hobergs.)