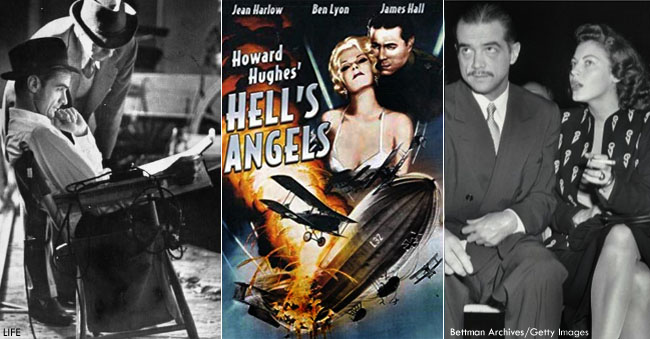 Howard Hughes directing, producing and mingling with stars such as Ava Gardner

Howard Hughes is one of the most written about yet most mysterious celebrities ever. "He was the most important movie producer in the Golden Age of Hollywood," writes Jeffrey Richardson in his new book.

Because of his incredible wealth, the eccentric genius was able to successfully challenge the tightly-controlled motion picture industry. He pioneered production & marketing concepts and exceeded the once forbidden boundaries of onscreen violence & sex.

Hughes, the first person to own a major Hollywood Studio, was part of the federal government's antitrust case against the industry that led to the collapse of the entire studio system. "He shaped the motion picture business that exists today," the author writes.

The fascinating character did things like the Frank Sinatra hit, "My Way." He constantly fought through rules, regulations, censors and everything else that got in the way of his dreams. Two things that helped him beat all odds were his chutzpah and major wealth.

"Big Howard," Hughes father, was responsible for creating unimaginable "moola" because of his own genius. He invented a rotary rock drill which revolutionized oil exploration. The bit chipped & crushed rock instead of grinding it, which allowed for deeper holes drilled quicker than ever before. Just as creative, was his decision to lease the bits to drillers, instead of selling them outright.

After the elder Hughes died, his son became the sole owner of Hughes Tool Company (1924). He would later create the Howard Hughes Aircraft Company and own 78% of TWA Airlines.

The author documents how Hughes left Houston wanting to become the most famous movie producer in Los Angeles. Quite a feat, considering he liked watching movies but didn't know much about the film industry, which was tightly-controlled by 8 corporations.

With seemingly unlimited wealth & ideas, Hughes and some of his new friends created "Two Arabian Knights" in 1927. His second film, "The Racket," about police & gangsters, not only made money but was nominated for Best Picture & Best Production. Not bad for a guy many in Hollywood thought didn't know what he was doing.

"Everything about Hughes ultimately seemed possible because everything was possible for him," writes the author. Film Daily listed him as "one of the 10 best Cinema Directors in 1930-31."

Readers will see how he battled & helped bring an end to movie censorship with the creation of the controversial movie, "The Outlaw," starring Jane Russell.

To eliminate competition, the main production companies of the time also owned the theaters so they had a guaranteed market for their movies. In 1948, Hughes purchased one of them, RKO, then agreed with a federal government Consent Decree, and divided it into two separate, independent companies—one for production/distribution & one for theater operations. The decree would bring an end to the studio system.

Hughes was known for hiring the best publicists and creating major "press" for his movies & stars, even if it involved scandals. He exploited the scandals involving such stars as Robert Mitchum, Ingrid Bergman and Roberto Rossellini.

Yet, he decided to leave Tinseltown in the 1950s and eventually move to Las Vegas, where he successfully developed yet another huge empire—Gambling, Hotels & Real Estate.

The man who became famous as a business entrepreneur, aviator, airline owner, movie producer & hotel mogul, ironically tried to avoid the limelight & become a recluse. He died in 1976. In spite of many books and articles about him, there's a lot about Hughes that still remains a mystery to many.

If you're interested in Hughes & Hollywood, you should enjoy the author's extensive research and writing about this maverick's approach to filmmaking, his creativity & courage, his naiveté & shrewdness, his success & failure, his good & bad sides & how he was able to revolutionize the motion picture industry.

(Editor's Note: Howard Hughes bought a gold mine near Virginia City, NV from a friend of the reviewer. The reviewer, a colleague of a journalist who wrote another book on Hughes, also has written about a TWA manager's private dealings with the fascinating billionaire.)