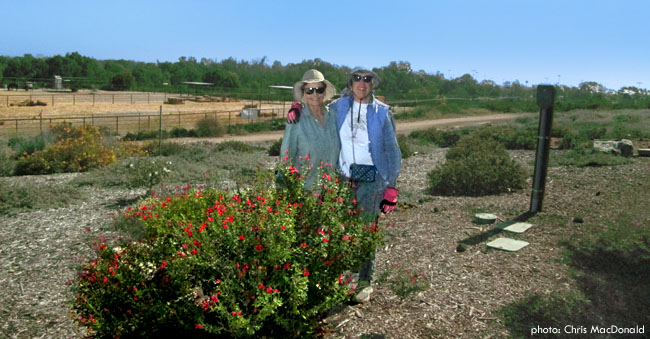 The Shipley-to-Shore Trail is taking shape in Huntington Beach thanks to the efforts of the HB Tree Society, the city and many other enthusiastic, hard-working volunteers, who gather each Thursday, Friday and Saturday to make it a reality.

The northern portion of the proposed 3-mile hiking, biking and horse trail is really progressing and a blessing to the joyful people of all ages, who use it regularly.

"It's truly a way we can connect the heart of our community with our magnificent ocean," said former Mayor and current HB City Councilperson Barbara Delgleize.

The northern part of the trail starts at Shipley Nature Center (17851 Goldenwest St.), goes south through Central Park, past Huntington Lake, up a rural hill near horses grazing in a corral, by the Urban Forest and west towards the Ellis Street Traffic Light at Edwards Street. The 16-foot-wide trail eventually will proceed through County Parkland to the west, head south behind the Fire Station, go through Overlook Park and Harriett Weider Park, then west to Pacific Coast Highway and the beach/ocean.

"When I walk regularly along the trail by the Urban Forest it's so soothing to the soul," said Leslie Harrington, who was with her blue-coated shepherd, Lucy. "It's such a wonderful feeling, combining fabulous views and good exercise."

Off the trail is a nectar butterfly section featuring salvia, sage, piranha, poppies and lantana. Volunteers helped plant and raise funds for an underground, solar irrigation system, which helps the native plants flourish. The dirt trail has been cleared of brush and weeds, allowing comfortable walking (or nearby steep hill climbing, depending what you choose). The panoramic views are sensational from the hill--you'll see Long Beach, wetlands, lakes and city lights.

"We want to have an Oak Forest on the hill, climbing to the Southwest," said Jean Nagy, Founder and President of the non-profit, HB Tree Society and a person whose vision and leadership have helped make Huntington Beach a much more beautiful city. Over the past 20 years, Jean and her volunteers, working with the city, have helped raise funds for and plant more than 7,000 trees and thousands of California native plants.

"One of our goals is to have a bridge going over the creek and an expanded irrigation system," said Nagy, a former teacher, who once served in the Peace Corps. Some of her main volunteer helpers are Ann Anderson, Shirley Knopf, Leslie Gilson, Dwight Dodd and Cheryl Johnson.

"Because of so many volunteers--people and groups--the likely hood of seeing the trail fantasy become reality is greater than ever--inch by inch, parcel by parcel," said HB City Councilperson Patrick Brenden. "Some of it is on land that used to be Encyclopedia Lots--land that had been given away with the purchase of a set of encyclopedias."

"Shipley-to-Shore is a fantastic idea, whose time has come," said HB Planning Commissioner Michael Grant. "With the recent passage of Proposition 68 Park Bond, this is something that could be completed in a reasonable amount of time."

If you would like to volunteer or donate money, visit HBTrees.org or mail checks to Huntington Beach Tree Society, P.O. Box 1269, Sunset Beach, Ca 90742.

Note: A Free Tour of the Urban Forest and Trail will start in the Urban Forest Parking Lot off Ellis (6681 Ellis Ave.) at 9:30am, Saturday, June 16th. "Be sure to wear comfortable shoes, a hat and sunscreen," advised Tour Guide Cheryl Johnson.