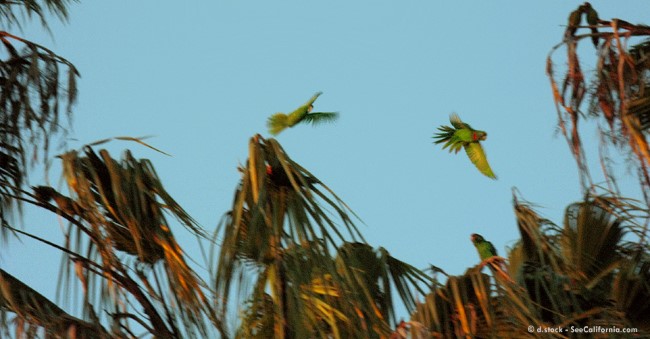 Conure parrots are not typically seen in California. These unlikely residents did not wittingly become permanent Southern California natives but were forced to fend for themselves when a fire apparently engulfed a pet shop, and the birds managed to escape.

The lively conure parrots came to the town, according to a shop owner near the Belmont Memorial Pier, after escaping a pet store in Pasadena approx. 35 miles away by air. The shop had caught fire well over 20 years ago, and the birds managed to get free, saving themselves but suddenly in need of surviving the elements of Southern California.


Belmont Shore, California--Not far from the elegant Gaytonia (apartment building) in Belmont Shore, you may have met my friends, the noisy conures who sometimes sit in the palm trees that sway above 2nd Street near Livingston in Long Beach? You may think you are seeing an optical illusion when a bright green bird with a red patch under his or her beak swoops past you as you park and visit the Belmont Memorial Pier. Many a resident in the townhome complex adjacent to the pier have had to adjust to these noisy neighbors known not only for their social behaviors, but for their chatter.

The Half-moon conures around Belmont Shore are comprised of a colony living in the palms since the 1980s. Surviving in Southern California some 3,000 miles from their South American habitat, the birds, like many immigrant critters, have taken a liking to the climate, and have learned to dine on a variety of food sources. They get up to 90% of the nutrients and foods that exist in their South American home.

The conures are a tropical bird that you can actually hear in the palm trees above or when you watch them swoop and fly, their darting and deliberate style that borders on aggressive can take you aback.

Conures come in many names, sizes and colors, but are loosely organized into small to medium-sized parrots. The term "conure" is used mostly in bird keeping, though the residents and business owners in Belmont Shore often refer to them as conures rather than parrots.

The Half-moon conure in Long Beach - Belmont Shore, and other similar birds around the globe include: Cinnamon Green-cheeked Conure, Extinct Carolina Parakeet, Nanday Conure and St. Thomas Conure. Found primarily in the western hemisphere in Central or South America, these large parakeets or small parrots are known to show off to get attention and will sway back and forth in a dance, or hang upside down from a branch.

Living in the open range, you take them seriously when you see them coming your way. Their strong beaks featuring a small cere can do damage when a predator attacks. In their native habitat that beak not only protects the bird, but also is valuable in cracking open the hard-shell fruits and foods. They live in flocks of 20 or more birds, which makes them less prone to attack by larger birds.

Half-moon conures are one of the quieter species, believe it or not, and they live some 20 to 30 years. The birds of Belmont Shore seem to have reproduced an maintained the colony, though it is unlikely any of the original birds from Pasadena are alive. The good is that they escaped to paradise and seem to being doing well. Enjoy them if you should see this lively and colorful survivor crew.