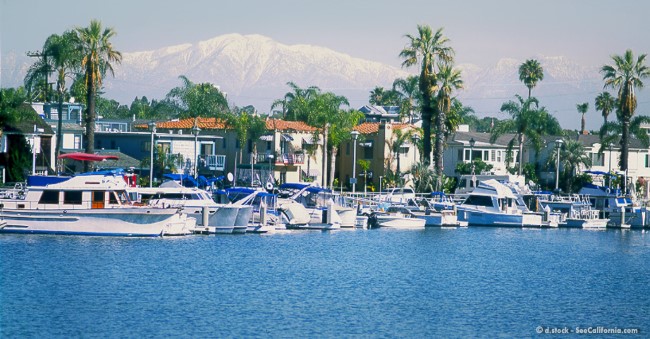 Belmont Shore is a community within the City of Long Beach that includes most of the city's public beaches and shoreline along Ocean Ave. One of Long Beach's most popular beach destinations is also popularly recognized for those seeking Los Angeles County beach vacations.

Belmont Shore once was a separate entity but eventually became part of city and was annexed in trade for receiving a pier, now called Belmont Memorial Veteran's Pier. Residents once tried to make it a separate city and only relinquished their claim after Long Beach promised them a pier. Just stroll the pier at sunset to see how many anglers take advantage of the free fishing on the Belmont

Memorial Pier. It is amazing.

The beach and 2nd Street shopping a the highlights to this busy, eclectic town where many houses were built in the early to mid-1900's.

Buzzing with shoppers, residents, visitors, beach-goers and the nautical crowd that makes use of the Alamitos Bay, visitors can rent a bicycle to ride the cement beach path, surrey, skate, jog & walk, and event bring your dog to Dog Beach!, or put together a game of sand beach volleyball at one of the courts at the beaches along Ocean Ave. It's there that you'll also find the jetski launch ramp, and a dog beach, plus Belmont Pool and Chuck's Coffee Shop, home to the "Locally World Famous" Weasel (see Bud's Top 10 Long Beach food joints.)

In addition to the city shutting down a couple streets for the summer safety of kids who flock to the little sandy beaches and bays, they also close the streets for events such as the annual holiday parade in December, Dine & Stroll food events outdoors, a a big car show annually. 2nd Street is the thoroughfare easily connecting Pacific Coast Highway and other cities with downtown Long Beach (Convention Center, Performing Arts, Pine Avenue, Arts District, Shoreline Village, Aquarium of the Pacific, Queen Mary, Port of Long Beach cruises, etc.

Among Long Beach's unique attractions and hidden gems are some noisy bright green parrots that have lived in towering palms along Ocean Blvd. near the sign for the Belmont Pool. These birds have quite a unique history. Roll down your car window if you happen to be sitting at the stop light and listen for the sound. If you hear noisy chatter from above, its the conures, just being themselves.

Give yourself several hours to explore Belmont Shore. Beyond the bend of the 2nd Street/Livingston/Ocean stoplight, Belmont Shore fades and downtown Long Beach begins to come into view. It is another portion of Long Beach well worth exploring and contains most the city's major attractions in one place.