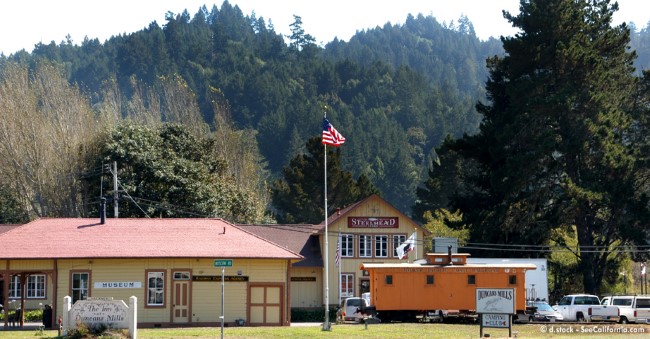 As you drive on the winding road, Highway 116 that parallels the Russian River in Sonoma County between Santa Rosa and the coastal towns such as Jenner, you may drive through Duncans Mills. You'll recognize it thanks primarily to road signs. Highlights along the way include Guerneville and Monte Rio, charming towns with towering shade trees, rolling hills, much like you will see in Duncans Mills.

The town has a hotel, The Inn at Duncans Mills, a couple shops, a market and the Depot Museum with several train cars, the Petaluma and Santa Rosa Railroad Company wooden box cars Nos. 100 and 102.

Special events are not bountiful in a town with a population of anywhere from 100 to 200 people, but there is one major event each year in which the town and its camping facilities swell to massive numbers. Held usually in July, there's an annual Civil War Re-enactment in Duncans Mills. The town is truly the perfect setting for this event. (civilwardays.net)

Entertainment in Duncans Mills includes the great outdoors activities such as hiking and river rafting or fishing. There's ample nature watching, as well. Growing into its own and rekindling the spirit of the once lively town that was founded and named for Alexander Duncan who built a sawmill in 1877, today you'll find a handful of new restaurants and artist galleries. Enough time has passed since the great flood on Feb. 18, 1986 when the Russian River crested at 48.75 feet. Low-lying towns such as Duncans Mills suffered damage, there were National Guard evacuations throughout the river towns, and the region is not immune to such occurrences today.

Situated in the North Coast region of California among tall redwood forests, Duncans Mills once was a mill town providing lumber for growing cities such as San Francisco. Today, it is a tourist stop, and is also a residential escape for those who prefer the charm that only towns along the Russian River can provide away from big cities in the Bay Area. Not far away is the Pacific Ocean to the West, and to the east are vineyards and wine trails of Sonoma County.