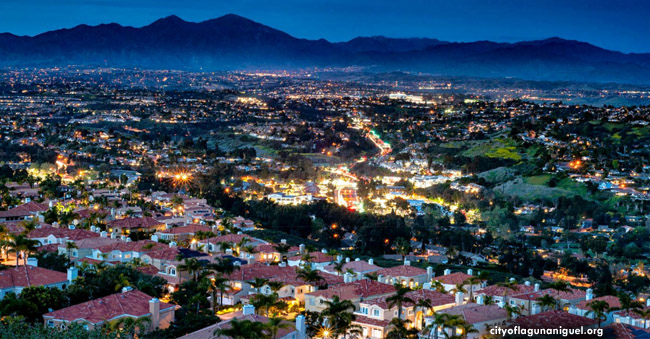 If you have friends or family living in Laguna Niguel one thing they're inclined to do is take you to a park or two. Some parks have great vistas overlooking the California coast, while others have greenery, small lakes and beautiful shade trees where you'll see lots of healthy people jogging, bicycling and enjoying Laguna Niguel's famous weather. Its location slightly inland means that on foggy days down at the beach, the sun often is shining here.

The city prides itself on its parks (23 of them, as well as one-third of the city's land declared open space.) If there's a specific attraction that tourists would seek out in the city, it would be the fabulous parks and trails.

Its best-known special event that attracts large attendance from surrounding areas is the annual Holiday Parade. There are also summer concerts, 4th of July Celebrations and more.

Incorporated as an Orange County city in 1989, the city website lists among its "hot topics" the noise at Camp Pendleton. Indeed, residents often hear loud booms that can scare the unwitting and wake up someone sleeping. Depending on atmospheric conditions loud noises from the firing of high explosives munitions can be heard 50 miles away. Laguna Niguel is approx. 25-30 miles as the crow flies from this military training facility.