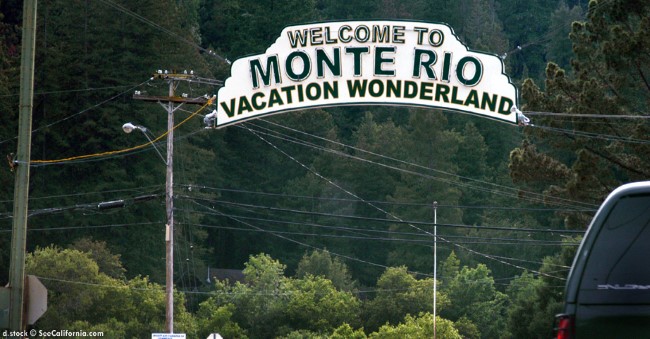 The sign says "Welcome to Monte Rio The Vacation Wonderland". And for most of us who rent a cabin or stay at a B&B in this neck of the Northern California redwood forests of Sonoma County, it truly is a paradise. However, there's a hidden side to this vacation playground for adults that's lesser known.

Stories persist about the oddities and supposed rituals in which our nation's leaders participate, taking part in ceremonies that would amaze the average taxpayer sitting at home watching re-runs on TV.

In California, a very real Bohemian Grove in a town called Monte Rio is far enough away to miss the scrutiny that bigger cities and places might be sujbect to. It is the summer meeting place for presidents, movers and shakers. When filmmaker Alex Jones and his cameraman, Mike Hanson, walked into the Grove a decade ago with a hidden camera, Jones and Hanson were able to film the Cremation of Care ceremony which the infiltrators believed was an ancient Canaanite, Luciferian and Babylon mystery religion ceremony. The footage was the centerpiece of Jones' documentary Dark Secrets: Inside Bohemian Grove.

Women aren't allowed in this all men's club, though a court ruling gives them the right to work there as service staff during the day. This is where our national and some international movers & shakers are encouraged to be born free, run naked optionally, and participate in the ceremonies, rituals and other such entertainment and amusements. Some describe it as a frat party for the ruling elite in government and industry.

Is it possible that the talk about rituals is poppycock-- all made up? Can't "old guys rule" and be left alone to run the country --and become masters of the Universe?

It's hard to believe that such a quiet, peaceful place among the redwoods hides so many eerie secrets. They say that you don't want to snoop around too much out in the giant redwoods of Northern California. But if you mind your own business, you can rent a cabin or cottage, enjoy the scenery, go wine tasting through the countryside, and head for the beach at Jenner a few miles west of Monte Rio.