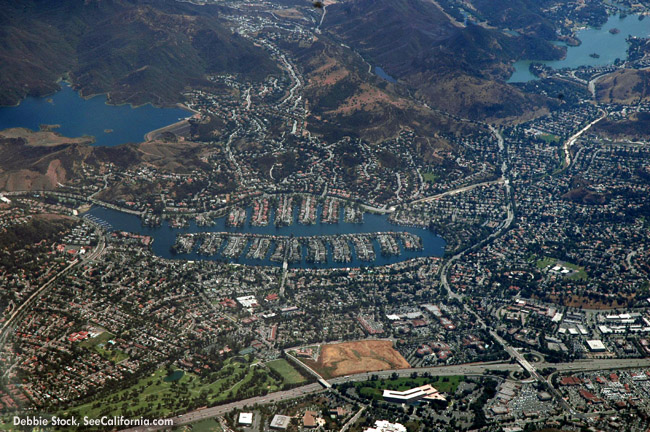 When you pass by Westlake Village on the I-101 Highway you don't really get to see much as it's tucked  behind a long stretch of Westlake Golf Course.  Who would know that there's an upscale residential, planned community built around a lake? The Westlake Lake is man-made, and the fairly recently-formed city of Westlake Village was incorporated in 1981.

Located in the Conejo Valley, Westlake Village is popular with doctors, attorneys, athletes, actors, and those who work in the Los Angeles but prefer going home to the solace of quiet commnity. When you arrive in Westlake Village it feels like you are leaving the crowds behind (except for freeway traffic.)

Highlights include two golf courses, Westlake Village Golf Course and Sherwood Country Club, the lake with its funky, fun 4th of July Boat Parade, Lake Sherwood, Lake Elenor, Los Virgenes Reservoir and Santa Monica Mountains National Recreation Area. The Pacific Ocean and Malibu's Broad Beach are just a hop-skip as the crow flies. However, you must take roads such as Kanan to access the beach.

The majority of the original "Westlake" as it was once called, was annexed by the city of Thousand Oaks in 1968 and 1972.