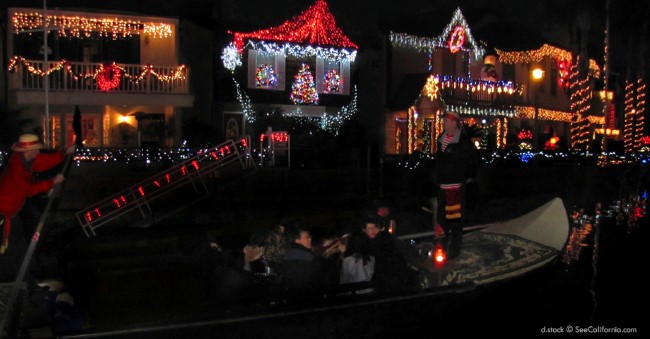 Parade night streets close at 5 p.m. Large Boats Starts at 6 p.m. All Large Boats will assemble along Lido Lane and off the sea wall in front of Naples Plaza and follow the Large Boat Parade map outline. Small Boat Parade Starts at 6:30 p.m. All the Small Boats will assemble in Marine Stadium. The #1 boat will lead the Parade. No boat will begin until the #1 boat has started the Parade.

NOTE: 2019 HAS A NEW ROUTE NOT REFLECTED ACCURATELY IN OUR MAP, WHICH SHOWS ROUGHLY THE GENERAL LAUNCH POINT AND DIRECTION OF EVENT

Alamitos Bay Marina off 2 Street and Marina Drive offers substantial free parking just over the Davies Bridge from Naples. Mothers Beach off Ravenna and Appian Way has some metered parking as well as Beach parking at Bayshore and Ocean Boulevard. There are public restrooms at Mothers Beach and at Bayshore and 2 Street. Also there will be Porta potties at The Colonnade by the fountain off Ravenna, Naples Elementary School and the parking lot off Appian Way near LBYC. naplesca.com

NAPLES - Long Beach--One of the most fun events during the winter holidays at the beaches in California is taking a boat ride past the decorated mansions in the California harbors...and one of the most loyal, most popular boat parades in such harbors is the Naples Holiday Boat Parade. It takes place in the cozy canals where houses line the channels, and bridges above the channels provide vantage points for thousands of visitors to watch the most colorful small-town Christmas boat parade in the West.

Newport Beach, Huntington Beach, San Diego, and Naples Bay (Alamitos Bay) in Long Beach provide a very Southern Californian experience where there may be a bit of chill in the night air--but the temperature can actually be warm and comfortable, as well. Designed after an Italian city, Naples enjoys canals with Italian names, and a charm all its own. Each Christmas the city assembles light displays in the bay with platform trees decorated with lights that give the effect of Christmas trees standing in the water, shining through the night.

During the Naples Boat Parade, there's a spectacular glow everywhere--in the water, and on the decorated homes that line the bays. The night of the parade there are few, if any options to rent a boat ride and be in the midst of the parade. Even the gondoliers shut down on parade night, usually participating in the parade, itself. (For a lighted boat parade you can actually buy tickets and ride in, be sure to check out Newport Beach Christmas Boat Parade!)

While the Naples boat parade only lasts one night, you can tour the lovely homes in the channel several ways. The cheapest is to buy a ticket for the Star Party Cruise. Enjoy a one-hour cruise around Naples Island on our beautiful 140 passenger Party Boat, The Star. Offering a cash bar with beer, wine, cocktails and snacks for kids, there's also some sweets, cocoa and foods to munch on for adults. Christmas Cruise departs from Alamitos Bay Landing, 140 Marina Dr., Long Beach, CA 90803.

Another option is to view this lovely spectacle in a Naples Gondolas from Gondola Getaway. And you can also rent Duffy electric boats and drive with your family around the bay at night. Each option provides its own merits and treats.

Or, take the family to see the beautifully decorated homes and boats of Naples Island by walking the paved paths that wind past homes and waterfronts.