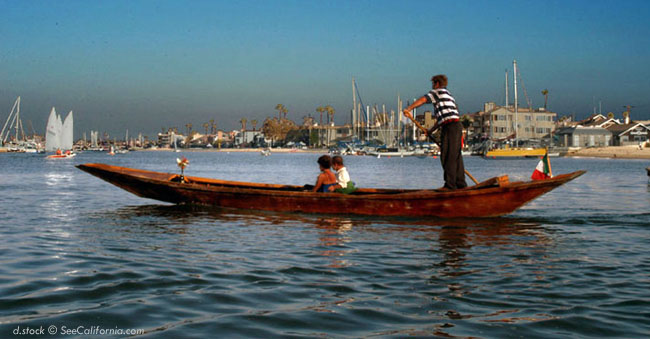 The Long Beach, California region of Naples is one of the city's southernmost communities overlooking the Pacific Ocean, yet set along a bay filled with waterways (channels,) bridges, a signature Italian plaza with a beautiful water fountain, roundabout traffic circle, and streets named for Italian counterparts.

This hidden gem is not exactly a tourist destination. Why? There are NO hotels in Naples, and scant visitor services. The region originally was built with tourist amenities (early 1900s) to attract potential buyers for homes. As time passed, the one hotel and other tourist-serving offerings were demolished and rebuilt to serve the budding waterfront community, part of the City of Long Beach.

So, why visit Naples? Gondola Getaway situated on the Long Beach peninsula visits Naples channels via private tours. And the biggest draw is the annual Christmas Boat Parade, a quaint and quirky festival of lighted vessels small enough to navigate the channels and pass under a series of bridges on the island.

It is a small, luxury area of Long Beach and is a highly desirable place to live if you can afford a modest home or castle on or near the canal. $1 million would buy something in the modest range. But the luxury properties are in the millions.

Naples has its own elementary school, a row of shops along 2nd Street with services and restaurants, but its infrastructure is provided through the City of Long Beach. To the west of Naples is a thin sliver of Belmont Shore, to its south is Long Beach Peninsula, and Alamitos Landing with the major portion of the city's municipal marina slips that are rented, and to the east are portions of Belmont Shore.

Naples is more a state of mind than a destination that it once was. When first built in the early 1900s there was a grand hotel called Hotel Napoli, and dock where tourists could easily depart for gondola rides or boat cruises. That hotel was demolished and today, there aren't any hotels located in the Naples region of Long Beach. However, tourists do visit to ride the gondola cruise attraction that has been in operation for several decades. You usually must make reservations before planning your ride on Gondola Getaway. Of all the gondola rides in California (San Diego, Newport Beach, Huntington Beach, Redondo Beach, Oakland) the Naples Gondola Getaway is the most authentic.

For shopping, there are a few stores, hair and nail salons, cosmetic surgery office, a dentist, several realtors and several restaurants.

FOOD: Our favorite BBQ rib restaurants, Naples Ribs (its counterpart and same owner in Costa Mesa is Newport Ribs,) is located on 2nd Street. Parking is limited, though there is an on-site valet service. The food is mid-range to expensive. We've eaten there over 100 times, always doing take-out. Our friends are never let down.

BIGGEST EVENT: The large event that attracts thousands of visitors to Naples annually is the Naples Christmas Boat Parade held along the canals of the town. It is usually held on a Saturday in December a week after the Belmont Shore Christmas Parade, also held on a Saturday. The gondola rides are not offered on that special event night. You can visit Naples throughout the holiday season and walk along the sidewalks near the canal to look at brightly decorated homes and boats passing by in the canals.

Mark and Willie to the Rescue