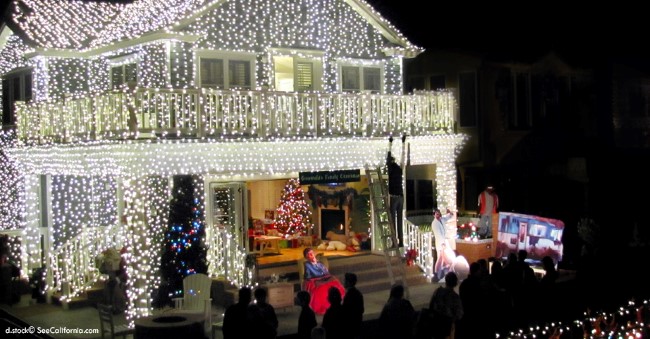 There’s enough action and lights on the Long Beach island of Naples to electrify California as each year comes to an end. One of the brightest displays the public can see during a themed contest that has been held for more than 20 years is called the Griswold Family Christmas, taken from the 1989 National Lampoon film, Christmas Vacation.

Clark Griswold (played by Chevy Chase) seeks his big annual bonus to buy a swimming pool for the family home that he illuminates at Christmas each year brighter than anything ever seen. On Naples Island in Long Beach, Calif., one such home exists, decorated with thousands of bright lights, the doors open to the living room and Uncle Lewis snoozing in an easy chair with his cigar that ignites the gas from the sewage Eddie had earlier dumped down the storm drain while emptying the holding tank on his RV. It’s an award winning display visitors can wander and see from the sidewalks along canals of an Italian-themed island where gondolas and Duffy boats parade by during holiday evenings.