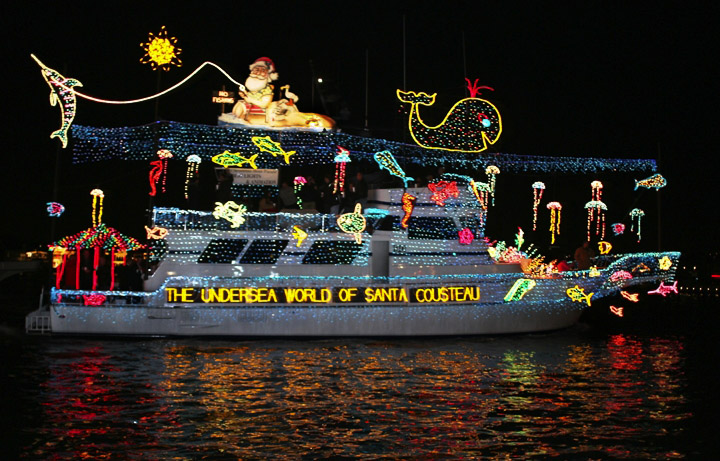 Parade begins & ends at tip of Lido Isle - approx. route and is hosted by Commordores Club of Newport Beach Chamber of Commerce

Newport Beach, Calif.—One of Southern California's and Orange County's most festive annual events is also one of its oldest holiday traditions. Started in 1908, Newport Beach Christmas Boat Parade has been held in Newport Harbor each December for more than 100 years! Unlike other boat parades where you must sit on the sidelines and watch, this parade allows visitors to buy tickets for rides on lighted boats and join in the fun. The parade passes by some of the most luxurious and opulently-lit mansions in Southern California, providing a double treat in the second element of the event, Ring of Lights Home Decoration Competition.

Your are part of the parade, passing close and personal to other beautiful vessels, you watch the houses as you glide by, and on board each boat are beverages, festivities and celebrating.

Often on the final night of the parade a fireworks show closes out the parade. Check out all California Christmas boat parades.

The Newport Beach Christmas Boat Parade began when Italian gondolier John Scarpa met developer Joseph Beek who established the Balboa Ferry Line. The two created Tournament of Lights. In 1907, Scarpa began the tradition of lighting boats by taking a group of visitors from Pasadena across the bay in a gondola decorated with Japanese lanterns.

In 1913 the parade was called Illuminated Water Parade. World War I erupted and a severe depression hit Newport Harbor. It was not until 1919 that Beek, who ran the ferry boat operations, created a Tournament of Roses style lighted boat parade. After years of refinement and change of dates, Newport Beach Christmas Boat Parade, came into existence as the culmination of years of experimentation. Newport Beach Chamber of Commerce now produces the event seen by an estimated million visitors each year.

Today's event can be experienced on land watching the boats, or by reserving a boat ride through one of the commercial boat operators at Newport Landing.