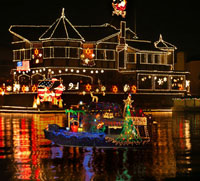 Route: from Ledbetter Beach down the coast to the Cabrillo Arts Pavilion, then back along the coast to Stearns Wharf.

The 36th Annual Parade of Lights festivities begin at noon. Different from years past, the Human-Powered category competition will be held during daylight starting at 4 p.m. Dozens of standup paddlers and kayakers dressed in festive attire will loop Stearns Wharf spreading holiday cheer.

Beginning at noon families can visit a Winter Wonderland on the City Pier in Santa Barbara Harbor.

At 5:30 p.m. distinguished judges, along with thousands of spectators will cheer on 25-30 boats as they parade the Santa Barbara coastline. A short fireworks display will follow the boat parade, followed in turn by an awards ceremony. Admission is free.