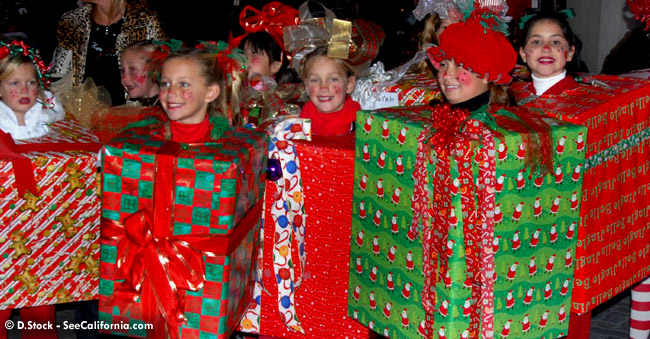 A small town parade with a Hawaiian-themed Santa and Mrs. Santa Claus atop an HB Firetruck, Girl Scouts, Brownie troops, woody cars and a band all march down Main Street USA, then head across PCH to Pier Plaza for a musical show. Youth dance groups, songs and speeches herald the official switch of the lights with snowflake designs on the Huntington Beach Pier. Dukes Huntington Beach offers hot cocoa and cookies for a small donation with proceeds benefiting the Youth Shelter.

There are several parades in Huntington Beach each year. One is the largest 4th of July Parade west of the Mississippi, another is the Huntington Harbour Christmas Boat Parade usually the first week in December, and the other land parade is possibly the smallest Christmas Parade west of the Mississippi. The Light a Light of Love Holiday Parade involves a band, a few scout troops, several classic cars, and a Hawaiian-themed Santa and Mrs. Santa Claus atop an HB Firetruck round out the parade. The parade only marches for several city blocks but still, the crowds come to watch. Families with children are especially big fans of this small town parade as the Pier Plaza stage entertainment that follows includes nearly an hour of community youth dance and singing groups.

Light a Light of Love Annual Celebration includes a snowflake lighting ceremony at the pier. The Children's Holiday Parade starts at 4:30 pm followed by Santa and Mrs. Claus at Pier Plaza for photos with the family.

The parade is held usually the first Sunday in December and features visits with Santa Claus afterward. The event also includes the finale, a flicking of the switch to turn on the pier decorative holiday snowflakes.

The Light a Light of Love Christmas Parade is held each year with sponsorships of snowflake lights supporting a youth shelter in Huntington Beach.

Other fun events to enjoy while celebrating seasons include the annual Polar Plunge on January 1, Easter Egg Hunt in Central Park, U.S. Open of Surfing, Halloween on Main Street, Oktoberfest and Nutcracker Ballet at Christmas time.