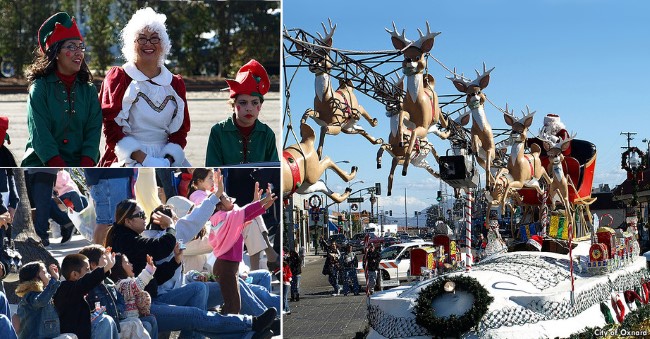 This beloved annual tradition, the Christmas Parade, is a daytime event inviting all ages to attend.

The parade includes fabulous marching bands performing holiday tunes, drill teams, Christmas themed floats, civic clubs and youth groups, equestrian units, and the big event, Santa riding on a sleigh (float). Oxnard celebrates Christmas with several parades--this one on land and the other on sea called Parade of Lights, which is a night event in the harbor.

The parade is festive and fun, and is held as a part of a several celebrations. Come early at 9 a.m. and stay late (till 6 p.m.) after the parade for the Oxnard Tamales Festival. There's really so much to see and do in Oxnard. Even after the Parade and Tamales Festival you can take a Victorian House Christmas Tour at Heritage Square.

Parade award winners will be announced at 12:15 p.m. from the main stage at Plaza Park, which is also the location of the Oxnard Tamale Festival, taking place on Saturday, from 9 a.m. to 6:30 p.m. Both events are free. The parade begins at 10 a.m. on the corner of 9th and A Street, and travels north on A to 5th street, west to C Street, then north to 2nd street.