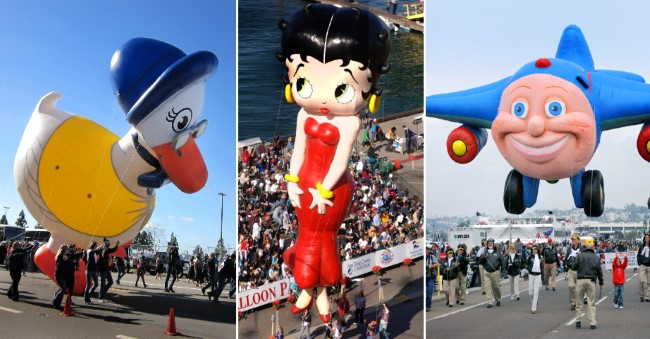 The country's largest balloon parade features over 100,000 spectators! If that's not big enough, get ready to feel like you're floating on air with spectacular floats, marching bands, and gigantic, helium-filled balloons that bounce up and down as volunteers tether them with their hands as they march down the parade route. These are just few of the offerings in this colorful holiday parade that takes place along San Diego Bay in downtown San Diego. This holiday tradition is part of the SDCCU Holiday Bowl game and celebration which also includes a marching band display.

Some balloons seen in this Holiday Bowl Parade have been cartoon characters such as Betty Boop, Popeye, Snoopy, Planes, Cars and Mother Goose.

Gaslamp Holiday Pet Parade
December 19, 2021, 1 p.m. 2022 tba
gaslamp.org
Register your pet for a small fee to be in the parade
Owners and their dressed-up pets march down the decorated streets of San Diego's historic Gaslamp Quarter. The event concludes with a Pet Expo featuring an awards ceremony honoring best pet holiday costume and ugliest holiday sweater.

Mother Goose Parade in El Cajon
November 20, 2022, 1 p.m.
Is a tradition that began as a gift to the children of San Diego in 1947. In San Diego's East County the largest parade in the county features floats, clowns, Santa Claus, marching bands, equestrian units and celebrity appearances.

Coronado Christmas Parade
December 2, 2022, 6-8 p.m.
Is a grand Holiday Celebration with a festive parade along Orange Avenue, the lighting of a 75-foot Christmas tree, holiday music and a fireworks show over Glorietta Bay.

Escondido Jaycees Christmas Parade
December 10, 2022, 2-5 p.m.
2022 theme is Miracle on Grand Avenue
This an annual tradition brings the spirit of the season to one and all.  Route: The parade starts at Escondido High School and proceeds south on Broadway down to Grape Day Park. One of the best places to view the Parade is at Lincoln School. facebook.com/ EscondidoJayceesAnnualChristmasParade/

No parade in 2022 - stay tuned - starlightparade.com