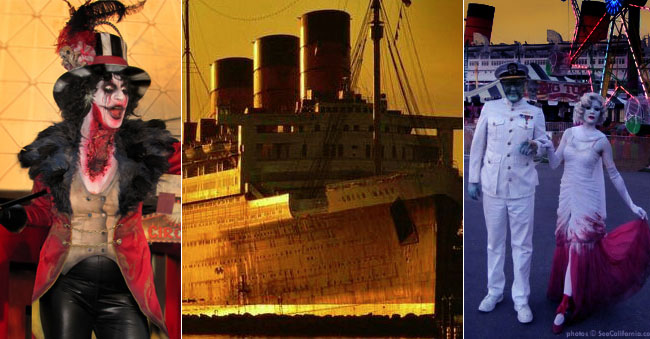 You could ask us if Dark Harbor is the best haunt in California -- we know about all of them and would tell you exactly what we think. It is the best event in all the state for these reasons:

If you're taking little ones -- this isn't your choice. Head for Disneyland, Seaworld San Diego or Legoland California's Halloween themes. However, if you're mature and looking for a night out, Dark Harbor ranks tops!

ROGUE -  Grey Ghost (the RMS Queen Mary) transported American troops during World War II. During a stormy December crossing from New York to Scotland, the famed ocean liner was broadsided by a monstrous force of nature classified by NOAA as a rogue wave.

DOOR 13 - one of the most haunted areas on the ship, an 18-year old crewman was likely crushed to death by Door 13 in 1967, and now Dark Harbor guests can walk-thru the iconic location.

STEP INTO FEAR
Dark Harbor – Home to over 200 terrifying monsters and led by The Captain and his army of the undead.

FEAST Maze: During WWII when The Queen Mary was in service as a troop transport ship, an enlisted military man serving in the ship's kitchen quickly moved up in the ranks to become a highly decorated Chef. Unbeknownst to the soldiers aboard, Chef would sedate a few solders at a time and collect them in the middle of the night to prep them for his latest dishes.

INTREPID
The Iron Master has returned to reclaim the precious vessel he built, fiercely guarding it from the antics of the freaks and ghouls.

DEADRISE  THE DEPTHS OF DARKNESS
Deadrise is a WWII escort ship that helped guide The Grey Ghost through enemy-infested waters. After a fatal crash during one of their dangerous voyages, Deadrise sank to the bottom and has been resting in her watery grave in the depths of the sea ever since.

LULLABY  HUSH HUSH DON'T CRY
Ring around the rosy, a pocket full of nightmares. The new Lullaby maze takes the visitor on a spine-tingling trip through the story of little Scary Mary.

B340
A DESCENT INTO INSANITY
What would drive Samuel the Savage to madness and murder? Take a schizophrenic sojourn into the psychotic mind.

Iron Master: Aboard a locomotive to Clydebank,  Scotland where the Queen was born, guests bear witness to Iron Master's cursed journey to save The R.M.S. Queen Mary from her predecessor's Titanic peril.

Ringmaster's gruesome big top of Circus is a maze that continues to disorient with horrifying illusions, death-defying acts and spirited thrills.

Scary Mary has haunted the ship since her mysterious drowning in the pool in 1952. 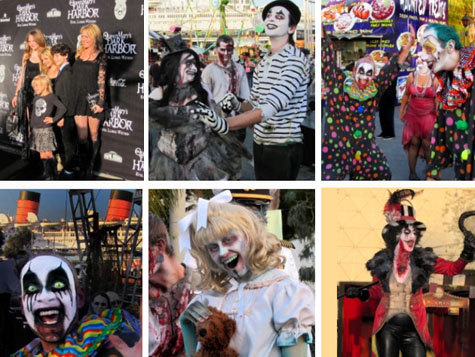 "Passengers" wind through musty smelling areas, where your eyes catch a glimpse of the empty pool in which a little girl named Mary drowned decades ago. You can see her wandering with her teddy at Dark Harbor, and throughout the year people report seeing her wet footsteps or hearing a giggle of laughter or splash when there's no water in the pool. The ghost was documented on "Unsolved Mysteries" many years ago.

And here are more Halloween events in Long Beach. Ticketed events may sell out.