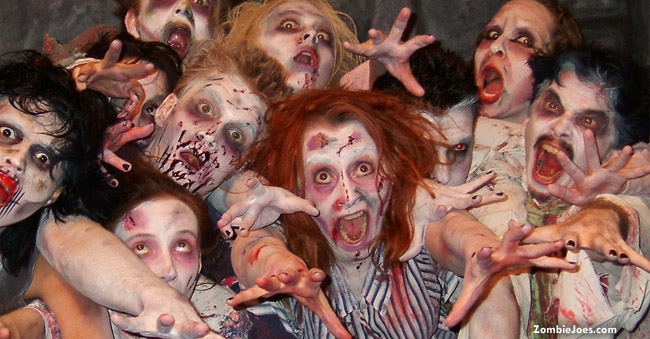 Tour of Terror takes ZJU's signature show, Urban Death, a series of horror vignettes designed to shock, delight and titillate audiences, and transforms it into an immersive haunted experience. The show will steer theater-goers and thrill-seekers through a terrifying performance and maze of inexplicable horrors, unfathomable monstrosities, and the disturbing spirits that walk among us.

The doors to the lobby opens five times an evening as guests are led through the maze in groups of two or three. Guests are provided with only a muted flashlight to guide them. Once through the maze and into the theater the flashlight is taken away and the show begins. After the show they are again given flashlights to walk back through the maze, where new performances and haunted surprises await them.

The biggest, scariest and best yet, as co-directors and creators Zombie Joe and Jana Wimer keep pushing the show to new heights. Drawing on more than a decade of Urban Death performances, the duo knows exactly how to twist the knife. The maze and show has evolved each year, pushing into new and surprising territory and promising an unforgettable experience for newcomers and returning fans.

This year's cast is epic, explains co-director and producer Zombie Joe. We're so excited to bring the audience into our world. The show is a labor of love and you can see our blood, sweat and tears in every scream.

As the show's popularity continues to grow in leaps and bounds – bringing more and more guests into the theater each year – we recommend two things: buying your tickets early, and visiting the show for the first two weekends it runs. The closer we get to Halloween the more shows we sell out.

Urban Death: Tour of Terror is an experience that creeps deep inside the brain and refuses to let go. You've been warned.

BACKSTORY: Zombie Joe's Underground Theatre Group aka Z.J.U. was born in August of 1992 in a small industrial garage in Northridge, California. The Underground continues to push the limits of live progressive theater as a vital experimental art form in honor of the famous Antonin Artaud, Bertolt Brecht, Anton Chekhov, Ivan Turgenev, Fyodor Dostoevsky, and George Lucas.