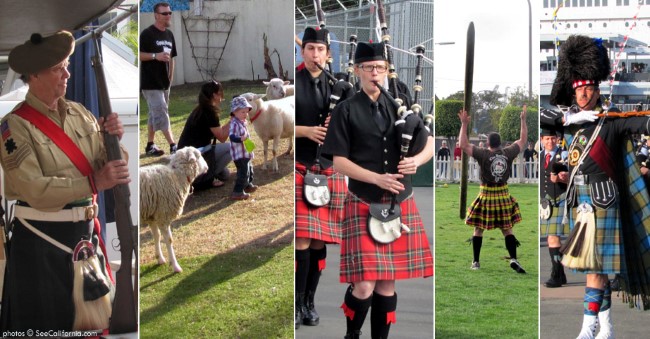 The North American Lightweight Women's Championship crowns the 2020 Champion on Sunday, February 16. The top lightweight women in the United States compete in all nine Scottish heavy events such as caber toss, throwing the weight, the hammer throw, putting the shot, and the sheaf toss.

New to the North American Professional Male Championship in 2020 is the Stones of Strength series, during which athletes are required to lift a number of natural stone boulders onto platforms of varying heights. The competitor who manages to lift all the stones in the fastest time wins - if they fail to lift all the stones, the number of stones and the time taken to load them is recorded.

Long Beach, Ca--The iconic Queen Mary recently celebrated its roots by hosting Scotsfest for the 20th time. And what a party it threw for thousands of happy Scots (and those who were temporarily Scottish) who attended the incredibly popular two-day annual festival.

ATTRACTION: Aquarium of the Pacific in Long Beach is one of the nation's premier ocean aquariums. Don't stand in line and wait! Get your tickets here!

Talented athletes, sensational musicians and delicious food (as well as drink), plus so much more were featured at the extravaganza in such a beautiful setting--both on board and next to the Queen. It's unlike any other Scottish Festival you've been too.

Built in Scotland in the 1930s, the spectacular luxury liner (and World War II troop carrier) was a lively and gracious host. Many of the enthusiastic activities were onboard the Queen, including the Rock Yer Kilt Concert, Solo Piping and Drumming Competitions, Highland Dance Contests, a Royal Dart Tourney and even Scottish Whisky Tasting Classes.

Not only was the majestic Queen rocking but right next to her were delighted guests enamored with the amazing Highland Athletics, nine competitions including the Hammer Throw, Weight Over Bar and the extremely difficult Caber Toss (throwing a long pole end over end takes not only strength but a lot of technique). Athletics Director Dave Garman said these activities were created out of necessity: "When the English took away the weapons of war from the Scots, they had to get resourceful and use what was near them like rocks and other heavy things that could be thrown at someone else."

The assembled masses of delighted visitors especially loved the Pipe Band Performances, where colorfully-dressed, highly-skilled bagpipers and drummers played their unique music with fervor, finesse and precision. There also were Historic Re-enactments and unbelievable Sheepherding Demonstrations (with well-trained dogs).

Both festival participants and their viewers were dressed to the hilt (or kilt). It was wonderful to see men, women, children and even some dogs dressed in kilts. Scottish Pride! There were numerous clans at the event, showing their individual pride and colors, including the Campbells, Donalds, Frasers, MacPhersons, Moffats and Youngs. Though featuring different tartans and histories, the clans share a unique camaraderie and bonding with other Scots. They had booths as did vendors, who offered everything from toffee to toys. One even was demonstrating how to make the sweet sounds from a fascinating instrument--a hammered dulcimer. This year's event had for the first time, beer tasting.

Scotsfest, like some good wines, gets better and better with age, thanks to people like Steve Sheldon, Director of Entertainment Events for the Queen Mary. "It's the ship's longest running event and we look forward to it every year," he said. The Queen and Scotsfest seem to have something special, almost magical, going on between them. Part of it may have to do with the proud sound of bagpipes, played at Queen Mary's birth and still heard on the ship today. It's a sound, like the memories of the historic ship, that you will never forget! Long Live the Queen and Long Live Scotsfest!