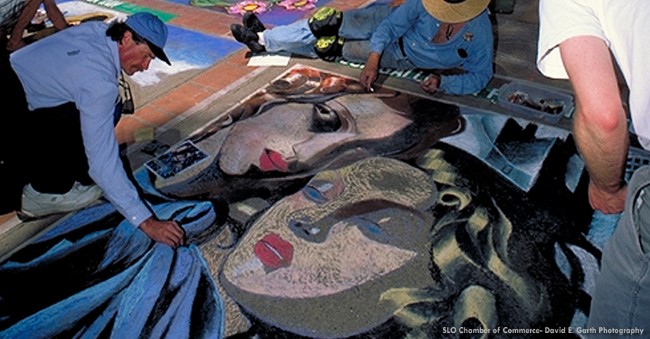 Each year in September, the plaza of the Old Mission is transformed with colorful, large-scale murals created by artists, known as madonnari, 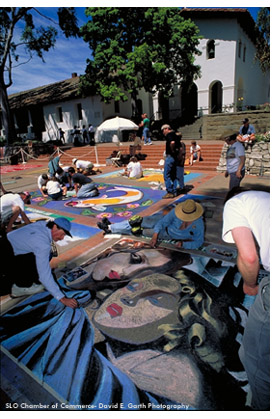 who derive their name from similar 16th century Italian painters who created similar murals made of chalk with themes of the Madonna (our lady.) The creations made with chalk are traditionally called street paintings, rather than chalk drawings or sidewalk art, because when well executed they can resemble paintings.

The SLO artists and participants launch their creations on Saturday morning and continue drawing throughout the two-day festival on the San Luis Obispo Mission Plaza and adjacent streets that are subdivided into 200 pavement squares” sponsored by businesses, organizations and individuals. Artists are invited to become madonnari, or street painters, and to get on their knees and fill these pavement canvases with their own unique inspiration.

Street painting has a long tradition in cities in Western Europe. The artists would travel from town to town and create street paintings for traditional religious and folk festivals. These artists lived (and still live) from the coins thrown onto their work in appreciation for the image and the artist's skill. The International Street Painting Festival is held each year in the village of Grazie di Curtatone, Italy and the romantic festival is hosted in the western hemisphere through San Luis Obispo's sister festival in Santa Barbara.

The American Institute of Architects (AIA) California Central Coast Chapter and its members volunteer to co-present the I Madonnari Festival to further the organization's goal of promoting architecture and the arts on the Central Coast. They work in partnership with the San Luis Obispo Chamber of Commerce to promote this unique event in a popular tourist destination that features one of California's longest running street fairs and farmers markets each Thursday evening in Downtown San Luis Obispo.