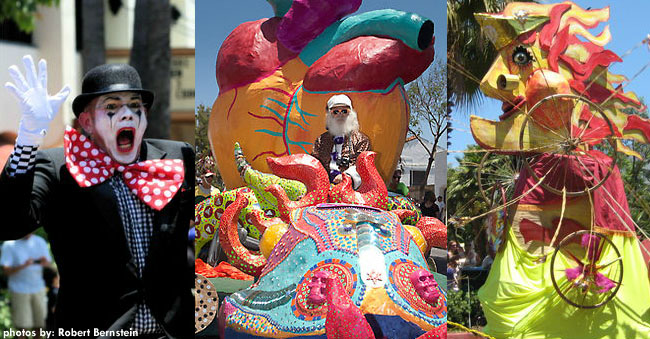 This weekend event that takes off where Doo Dah Parade in Pasadena dropped the ball and went home, is an art festival and parade that like no other in the world. In fact, event planners say that celebrants who have seen pictures and heard about the parade come from around the globe to experience California's Riveria during the Summer Solstice Celebration. If you're looking for color, this is it! Vendors sell food and beverages, arts & crafts boutique features more than 75 vendors, drum circle on Saturday, the floats from the parade are parked along Micheltorena Street for close-up inspection on Saturday only until approximately 4:30 pm, and Community Mural directed by artist Carlos Cuellar. This is just a small sampling of the activities.

Summer Solstice Parade started in 1974, as a birthday celebration for artist and mime Michael Gonzales. Joining forces with the Summer Solstice Music Festival, the event sought to celebrate the longest day of year. The Parade and Festival is the largest arts event in Santa Barbara County, drawing crowds of over 100,000 spectators.