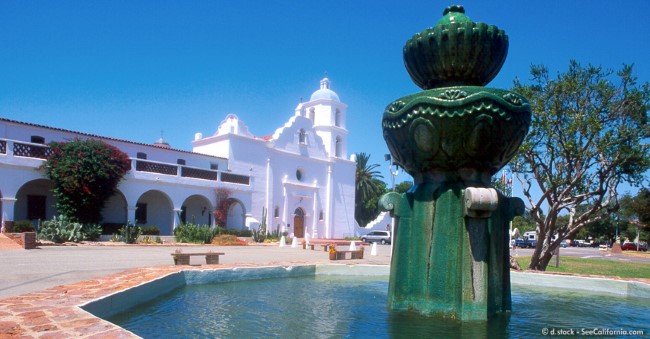 Are you looking for something to do in Oceanside? One family-oriented experiences provides educational opportunities and learning, is by no means boring.

Mission San Luis Rey de Francia (usually known as Mission San Luis Rey) in Oceanside, California is one of California's 21 missions built between the mid 1700's and early 1800's by Spaniards hoping to establish a foothold in Western North America. While their attempts to create self-sustaining communities didn't succeed, the Spaniards did make an impact, introducing trees, wine stock, plants, some animals and a lifestyle that shaped California's existence today.

San Luis Rey was considered the "King of Missions," and when you visit, you gain a sense of royalty, thinking back to the time that this structure was built in 1798. While it is located fairly close to the first mission built in San Diego, Mission San Luis Rey de Francia became the 18th of 21 California missions. Father Fermin Lausen was in charge of the construction of the mission named for Louis IX, king of France. The structure has been rebuilt to reflect the original mission shape of a cross, combining architectural influences of Spanish, Moorish, and Mexican designs. Mission San Luis Rey was one of the largest outposts--almost as big as two football fields.

Its architect was Frere Antonia Peyri, who oversaw design and construction. Like his predecessors who came and built other missions, the challenges included a lack of materials available in Spain, thus requiring adaptation and use of a more rustic adobe brick which lacked sturdiness Spaniards were accustomed to in their native land.

Arranged around a 500 by 500 foot quadrangle, San Luis Rey mission was the largest and richest of all missions, thanks to an ideal climate, a natural flowing river on the land, and the Pacific Ocean just four miles away. The property was huge, comprising approx. 1,000 square miles in what is now San Diego and Riverside counties. 16,000 cattle, 25,500 sheep, 2,150 horses and production of 2,500 barrels of wine provided a major enterprise which was hardly something a few Spanish missionary padres could tackle. Like all the missions, the concept of establishment was to recruit local native Indian populations and get them to live on the land, work for the mission effort in exchange for food and shelter, and also convert them to Catholicism.

This outpost and its lands were so vast that unlike some other missions, baptized Indians (Shoshonean tribe Luiseno Indians) were able to stay in their native villages and serve the mission by working on the ranchos.

The mission itself features a quadrangle integrating an intricate aqueduct system which supplied water for gardens, pools, bathing and laundry. There were three churches built with the last one constructed around 1815.

When you go: You can wander the mission grounds, and take the guided and self-guided tours, visit the museum, gift shop, Franciscan Retreat Center, cemetery picnic facilities, and relax at the sunken garden popular for weddings and event functions.

By 1846, mission life disappeared and its future was bleak until President Abraham Lincoln signed a decree in 1861, returning the missions and a few surrounding acres to the Church. 30 more years of vandalism and neglect followed before restoration took place. Today, California missions are popular tourist attractions, but many also serve the local community as houses of worship.

The nearest museum to the south is the San Diego Mission and to the north is Mission San Juan Capistrano, located in Orange County.