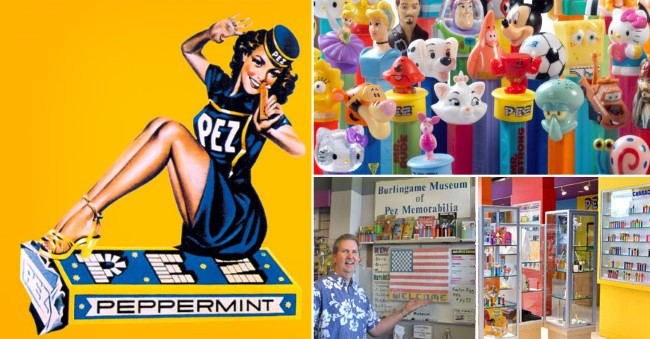 CLOSED: Burlingame Museum of Pez Memorabilia. The cool candy museum was a popular attraction for several decades. As of 2021, reports are that it is gone.

Do you have a passion for Pez? Gary Doss does

Gary Doss, owner of the world's only Pez Museum said, "From the first moment I bought my Pez dispenser over 20 years ago I was "pezed".

In case there is anyone alive who doesn't know about this wacky little dispenser, it looks like a disposable lighter, but when you flip the top, instead of flame, out comes a piece of candy. Doss was so fascinated with his new small, utilitarian piece of plastic he began collecting Pez memorabilia.

Soon he closed up his computer repair store and turned it into the Burlingame Museum of Pez Memorabilia. It's easy to drive by this weird museum which is tucked behind a most innocent looking storefront a couple of doors down from a Honda dealership. Behind the squeaky front door lies a treasure-trove like no other in the world. This is a place that people actually seek out. Why? Nostalgia.

As any die- hard collector will tell you, the word is short in German for Peppermint. The Hass Company of Austria began making the peppermint flavored candy in 1927 and marketed it as an adult mint for people trying to quit smoking. The little blocks of candy were originally sold in tins. The dispensers came around 1952. Today, the dispensers are still made in Austria, the candy, is made in Connecticut. Doss said, "The first Pez dispensers are known to collectors as regulars and didn't have character heads. Around 1952 cartoon heads like Mickey Mouse and Donald Duck and fruity flavored candy was introduced. The rest, as they say, is history". Today there are over 350 different heads (most of them are in the museum) and counting.

Pez dispensers have appeared in such movies as "The Client", "Stand By Me", and "E.T. The Extraterrestrial". A Tweety-Bird Pez has even appeared on "Seinfeld" helping to make according to audience surveys, "one of the funniest TV moments of all times". What's all the fuss about?

With a broad smile Doss said, "When you show it to anybody you immediately get a smile on their face. What's not to like about it. It's a toy that dispenses candy. People eat em up".Some people may sniff at Pez dispensers saying they're nothing but kitch. Just plain junk. Pez aficionados disagree. Pez is a part of American pop culture. The museum was even featured Ripley's Believe It or Not famous syndicated column in 1990. Doss is reluctant to put a price on his collection but it is safe to say it's significant.

Serious collectors will pay about $ 1,300 for a Mary Poppins .The Luv Pez, a strange psychedelic dispenser produced in 1968 that features an open hand holding an eyeball, is worth about $800.Zorro and captain Hook will fetch you $110 each. Other less expensive dispensers like Lynda Carter (Wonder Woman) and Jim Davis (Garfield) will put you back about $25 each.

Pez Quiz
1. What was the most popular Pez character?
2. Is there an Elvis Pez?
3. I want to collect Pez. Are there any books available?