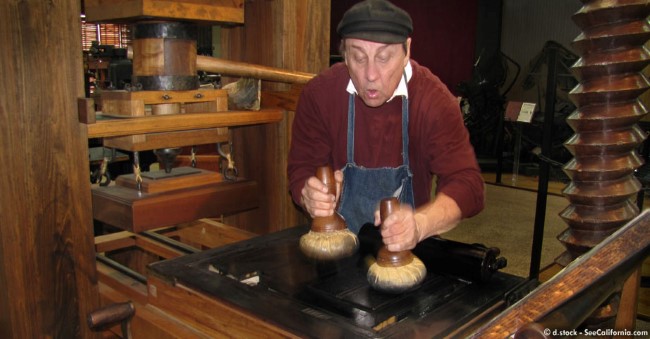 CARSON, CALIF. --You gotta see it to believe it! The International Printing Museum is chockfull of working antique machines and tools of the graphic arts--from historic Chinese printing blocks to a Colonial printing shop; from small hobby presses of the 19th Century to cast-iron, powered presses that make newspapers and books. You even get to hear the clattering sounds of the 1890 Linotype that changed the world, and actors, playing historic figures like Ben Franklin, not only explaining the importance of the printed word but showing you how to actually print it.

It's absolutely amazing. Even Hollywood thinks so. Some of their equipment is filmed for movies such as Clint Eastwood's production about J. Edgar Hoover. Their Columbia Press was used in Tom Cruise's "The Last Samurai"; a wooden press was used in the "Gilmore Girls" TV show; another press in the James Stewart/John Wayne movie, "The Man Who Shot Liberty Valance;" yet another in Will Smith's "Seven Pounds;" the Jobber Press was featured in "The Waltons"; a proofing press was used in Leonardo DiCaprio's "Inception"; the list of fame goes on and on and on…Bonanza, Have Gun Will Travel, Twilight Zone, The Rockford Files…. Even the Smithsonian has recognized the significance of this museum, which got its start in 1988, after E.G. "Ernie" Lindner donated his collection of 50 years. He was a seller and mover of printing equipment. When he sold new machines, his customers sometimes let him take the old stuff away, said presenter and Ben Franklin actor, Phil Soinski. Lindner started the museum with David Jacobson of Gutenberg Expositions. 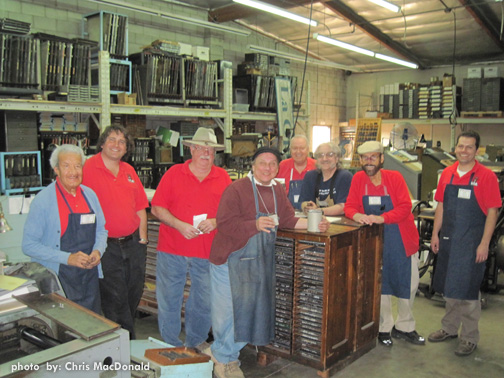 Soinski shows guests what working in an early print shop was like--it was like working out in a weight room. Some presses, like the Columbia , have weights and counterweights; others use pulleys; many have hand cranks; everything is done repetitively; lots of hand action; lifting heavy things was commonplace.

He explained The Grasshopper Press helped make newspapers daily because they could produce a high volume (800 papers an hour). The Los Angeles Daily Times was printed this way this way in the 1870s. (Soinski then printed a copy of the Times' cover.) Read more...>

Mark Barbour, Founding Curator and Executive Director, invites everyone to stop by on Saturdays from 10 a.m. to 4 p.m., or call for appointments during the week, 310-515-7166. The absolutely impressive place is located at 315 Torrance Blvd., Carson. Find out more at printmuseum.org.